Take a look at the NBA Chicago Bulls Playoff After Time Out Plays that helped beat the Boston Celtics! Great NBA Plays available for free inside! 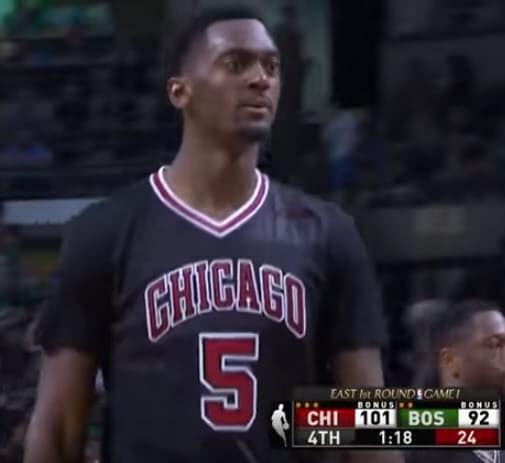 Jimmy Butler scored 30 points and grabbed nine rebounds as the NBA Chicago Bulls outlasted Boston 106-102 in Game 1 on Sunday in what was an emotional night for grieving Celtics star Isaiah Thomas. Thomas led the Celtics with 33 points, a day after his 22-year-old sister died in a car accident back home in Tacoma, Washington.

For most of this season, the Boston Celtics have had to overcome some form of adversity. Players were unexpectedly sick at the last minute. Others injured and held out longer just to make sure they don’t have a recurrence.

This series is more than your typical one seed versus eight seed. The Bulls core of Jimmy Butler, Dwayne Wade, and Rajon Rondo is much more accomplished and talented than their seed suggests. The Boston Celtics won the top seed on the final night of the NBA regular season. The Chicago Bulls (41-41) secured their spot and will have 260 games of playoff experience to deal with in Wade and old teammate Rondo. The teams had split the regular season 4-game series with the home team winning their two home games.

Game 2 is Tuesday night in Boston.

The Chicago Bulls are in 1-0 in a playoff series that no one thought that they would win a game against the Boston Celtics. Jimmy Butler was clutch in the fourth quarter and hit free throws to clinch the win. Robin Lopez was dominant on the boards with 11 rebounds.

Bobby Portis was all over the place during this game. He hasn’t seen any playing time lately. He had 18 DNP-coach decisions, including the home opener against Boston, another 15 games of so-called garbage time, playing fewer than 10 minutes in mop up, late game situations.