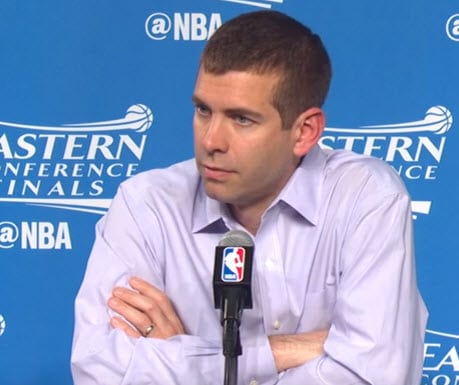 No Isaiah Thomas? No problem. Avery Bradley’s last second 3 pointer bounced, bounced, bounced, and bounced around the rim and finally went through the basket with less than a second left to give the Boston Celtics a big-time 111-108 win over the NBA Cleveland Cavaliers in Game 3 of the Eastern Conference Finals.  I have diagrammed this ATO Game Winner:  NBA Boston Celtics Stagger Set Play.

The Boston Celtics had gotten beaten badly in games one and two at home, and losing their All-NBA PG Isaiah Thomas for the rest of the season; not many gave the Celtics a chance going into Cleveland. The win snapped the defending champions 13-game postseason winning streak and tightened the series to 2 games to 1.

But the last second game winner by Bradley wasn’t the only stunning part of the game to Cleveland. For much of the game, it looked as though Boston was falling for a 3rd straight blowout, who trailed by twenty-one points in the third quarter before furiously rallying to tighten up a series that looked over.

Smart, who started in place of Thomas, made seven 3-pointers and scored 27 points, and Bradley had 20 for the Celtics, who were given little chance after losing by 44 in Game 2 and then losing Thomas for the rest of the postseason because of a hip injury.

LeBron James had one of the worst games of his postseason career, finishing with 11 points and six turnovers.

Will this give the Celtics momentum going forward? Will this be a wake-up call for the Cavs? We will have to wait and see…Game 4 is Tuesday night in Cleveland.