My 1-2-2 Press Philosophy by Keith Lay

You ever been in a situation where you were not in control? How did you feel? Probably not great? I would say you were nervous, hesitant, and maybe scared! This is the way I want the teams I play to feel about playing us. I want to get in the head of my opponent so much that they cannot run there scheme! That they find no success and continue searching for something that works. They search and search but nothing works! Because they can’t figure out what is coming next.

I love the 1-2-2 press because you can have someone on the ball or off the ball. At the 3 I would find someone who is taller with long arms be the front man in this press. You can really make it hard to get the ball in. If this person has a motor that won’t quit this is a great sport for him. Your three is the director of traffic , meaning he forces the ball where he wants it.

At the 1 and 2 you need to have quicker athletes who can get to the corner and trap. Players who are smart because they can’t reach but they need to be able to get hands up and get loose balls.
My 4 and 5 are interchangeable as far as what side they line up on but if there is a deep man I want my 5 back and my 4 cheating further over. My 4 is reading the eyes and staying in the passing lanes. My 5 is last man back and watching for the press break. 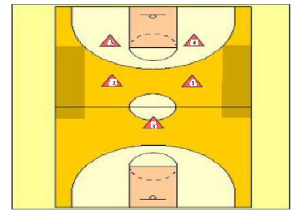 The confusion comes into play when you start the game with your 3 on the ball but then you back everyone up to the free throw line with the 3 slightly above that place. Then dropping back to half court where your 3 is just on the other side of the half court and your 1,2,4,5 are on the defensive side. Still the same principle or trapping in the corner. You are just now trapping at half court as soon as they step over the line!

Once they figure out this is a trapping 1-2-2 press it might be too late! You’re going to get turnovers and easy baskets if they cannot handle this! Quick easy baskets make for a short game! If they beat it then you pull back and get out of your press. But pressure is never let up!

I was born in Waco Texas in 1981. Adopted by Robert and Sandra Lay shortly thereafter. My father loved to play basketball and taught me the game and gave me a passion for the game. Many nights we would stay outside till dark playing one on one or horse. As I grew older I played in organized leagues and got to be a good player. I understood the game at a higher level than most and saw things that kids my age couldn’t. The one thing I saw was a lack of coaching and that became my drive for becoming a coach. I felt like coaches have a great opportunity and responsibility to impart life changing wisdom about the game and life. I went on to college at the University of Houston where I graduated in 2006 from the human health performance department. I started coaching in 2001 and continue to coach such sports and basketball, football, baseball, softball, and soccer. I am passionate about sports but more about teaching boys to become men!

My 1-2-2 Press Philosophy by Keith Lay