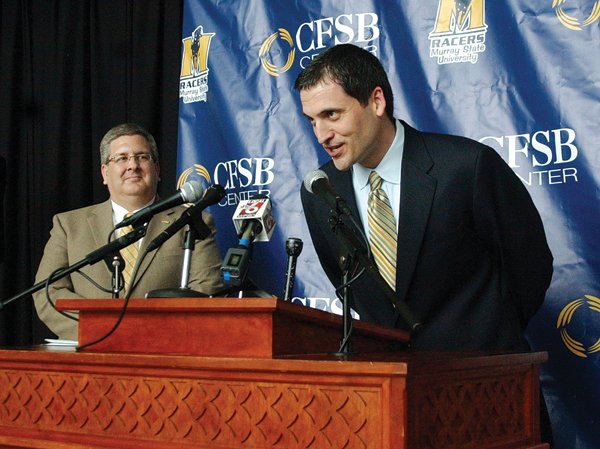 I want send a congratulations to Steve Prohm on receiving the Head Coaching job at Murray State University.  I have personally known Steve Prohm since 2000 when I was  at Blinn College.  Billy Kennedy had just gotten the job at Southeastern Louisiana State University in 1999.

Steve Prohm was a young assistant that recruited like crazy in Texas.  I saw him everywhere so I got to know him well.  I have been hoping for the last two weeks that Steve would get the head job at Murray State University.  He didn’t have a “name” behind him except for Coach Billy Kennedy that had just gotten the Texas A&M University Job.

I just saw Steve at the Final Four for the first time in over five years.  He was the same guy.  In this profession alot of people change…… especially when they move up the food chain.  Steve hasn’t changed alot.  We had a lot of fun at the final four exchanging stories for a little bit and he introduced me to a couple of his friends.

Here are a couple quotes from the Murray Ledger & Times:

He seemed to choke back tears on several occasions, first while thanking Kennedy, his mentor, and second while crediting his father for instilling in him a tireless work ethic that he believes has been behind his success.

He closed with a challenge to fans.

“I want to close by challenging all of you to dream big, to be good to people, and to never give up, because that’s why I’m standing here today,” he said.”

“If you are passionate about the basketball coaching profession….. Good things happen to Good People. Timing is everything.  Never Give up on your Dreams!” — Scott Peterman

“He thanked many people, but spoke especially about Kennedy and former Alabama head coach David Hobbs, who gave him his first opportunity as a student assistant.

“I was 18 years old, and I’m just thankful he didn’t throw me out of practice cause I was trying to coach everybody — the guards, the wings, the forwards,” Prohm remembered. “He got on me a couple times, but he stayed patient with me, an eager student assistant who had dreams.”

For Prohm, those dreams finally came to fruition on Monday.”

Congrats, Steve.  You deserve it!  You have a new Murray State University Racer Fan today.

One More Camp - Santa Clara This past week I travelled to San Jose, CA to work the Santa Clara University basketball...

"The Heart of a Volunteer" Although the road seems to be more physically exhausting as well as a higher factor of...