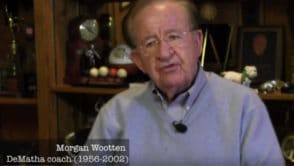 The Morgan Wootten Basketball Camp Round Table Notes will help you learn from one of the nation’s finest high school basketball coaches in America. Morgan Wootten had a 45-year career at DeMatha Catholic High School.

Coach Wootten was one of the great teachers who wouldn’t humiliate, physically hurt, push or shove you. He was an actual coach. Coach Wootten was the first high school coach that inducted into the Naismith Memorial Basketball Hall of Fame.

Some coaches don’t know how to coach the game without hollering, screaming, and cursing. They cover up that they might not know the game.

Coach Wootten went 1,274-192 at DeMatha High School. He would acknowledge some of his mentors: John Wooden, Red Auerbach, and Joe Lapchick.

Coach Wootten started the first-day summer basketball camp in 1961. His son, Joe still holds the camp to this day.

The Morgan Wootten Basketball Camp Round Table Notes will show some of the innovations that are now common in high school basketball. His teams were the first powerhouse to play teams from other states. They used full-court pressure defenses and a defensive play that led to the offensive foul.