Coach Mike Krzyzewski has had some fantastic post players over the years. From Elton Brand to Jahlil Okafor, Christian Laettner to Shelden Williams, all these players could convert at an extremely high percentage in a post-isolation situation. Coach K, in keeping with an up-tempo style of offense, got the ball into the post quickly for a clear-out situation in a play he’s run for years called “release”. 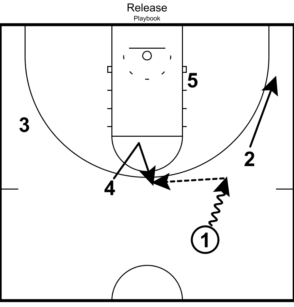 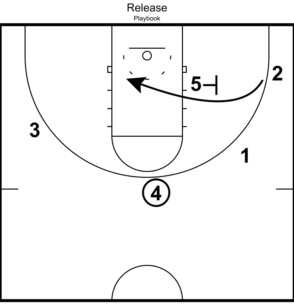 1 dribbles the ball up the wing, where the player they want to isolate in the post (5) is waiting just above the block. The trailer, 4, cuts down to the nail-hole and then pops out, getting the pass from 1. That triggers 2 to come off a flex screen from 5. It looks like 2 is going to be the scorer on the play, and 5’s defender is forced to give help on the flex screen. 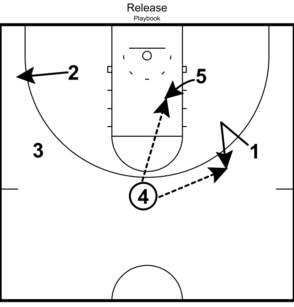 As soon as 2 clears the flex screen, 5 starts to bury his man for low position in the paint. 4 looks to get the ball inside directly off a high-low pass, or he swings it to 1 and 1 looks to make the entry pass.

This is a great action for a team with a dominant post scorer. If you teach 5 to engage in contact as soon as his man helps off the flex screen, he can get great, deep scoring position and have a chance to get to the free throw line or bang in a layup.