Below you will find 5 baseline out of bounds plays out of Duke’s “Regular” BLOB series with different variations out of the same set. Coach K has also used some of these actions with the Team USA at the FIBA World Cup as well as in the Olympics competition.

As an example, “Regular Up” was ran on numerous occasions for Klay Thompson in the 2014 FIBA World Cup as it is a tough to guard screen the screener action for designed for a shooter. Another example, variation “Regular 4” was ran often for Duke’s stretch 4 man Ryan Kelly to take advantage of his outside shooting during his career at Duke University. I think that you will really enjoy this Mike Krzyzewski Duke Blue Devils Regular Blob Series and it’s an excellent way to have some continuity in your blob series for your basketball team and program. 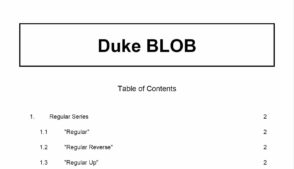