The Mike Krzyzewski Duke Blue Devils ATO – Hammer Action set play is a great action from Coach Dana Beszczynski.  Coach B  is a HUGE X’s and O’s guy.  You will learn a lot from him.  Check him out on twitter!

This is a great ATO set play run by Duke in their match-up against Kansas.  Utilizing the PG for the entry pass, 1 executes the DHO with 3 out of the corner.  4 steps up from the weak side corner and sets the “Hammer Screen” for 2 on the weak side as 5 ball screens for 3 coming off the DHO.

You can really see the shot clock management by Duke here in this complete breakdown of this set play after the 1st option breaks down. Duke does not panic, reverses the ball and then goes through their secondary options. 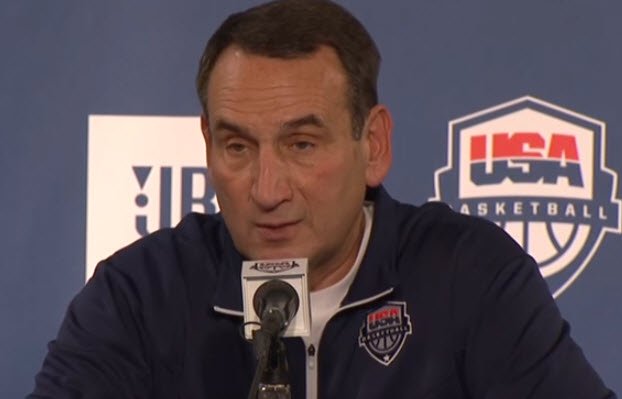 Great read by Kennard cutting to the open space on the FT line area before the Post entry to Jeter.   Guard-Guard exchange and again reading a possible give “n” go action.

Duke has no clue what their strengths are when at least 33 percent of the projected rotation hasn’t played to date? Duke Will be an phenomenal offensive team, because they’re averaging 1.22 points per possession even with three elite talents — Harry Giles, Marques Bolden, Jayson Tatum — missing the first seven games because of injury. We will have to see how Coach K gells all his players.