Coach Mike Krzyzewski, the leader in wins for NCAA Division 1 men’s basketball, is entering his 42nd season as a head coach and 37th with Duke. During the past 41 years, he has compiled a 1043-321 record, won 5 NCAA Division 1 National Championships, and made 12 NCAA Final Four Appearances. He also has 13 ACC Tournament Championships and 12 ACC Regular Season Championships. Coach Krzyzewski started as a head coach at Army West Point in 1975 and in his first season had an 1–14 record. He quickly turned Army around with a 20-8 and 19-9 record in the next two years, but fell off with a 14-11 and 9-17 record to end his time there. In 1980, Coach K made the move to Duke and went 17-13 in his first season. He then had back-to-back losing seasons in 1982 and 1983, and since that time he has never had a losing season again. His 2015-2016 team was his first to lose double-digit games since 2006-2007, and since 1984 he has only had three seasons where his team has lost more than 10 games. Krzyzewski played at Army under Coach Bob Knight, and started his coaching career as an assistant for Coach Knight at Indiana. Coach K has also been heavily involved with Team USA Basketball, recently leading the team to a Gold Medal during the 2016 Rio Olympic Games.

This video doesn’t show the BLOB, but it shows Grayson Allen cutting off of various screens in the Duke offense.

This play has been used for Grayson Allen and Luke Kennard, and has the shooter throw the ball in and then cut through and elevator screen to the top of the key. The Blue Devils often get a shot on the initial screen out to the corner if the big doesn’t help or show on the cut. 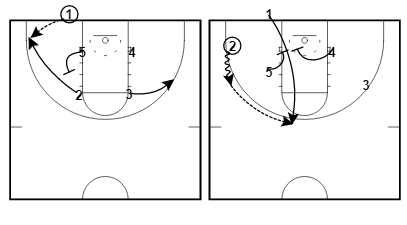