Mike D’Antoni would inherit a squad like the one he had with the Phoenix Suns. An offensive minded team that is led by potential MVP Candidate guard in James Harden. Can’t you see James Harden running this play: Mike D’Antoni Houston Rockets Elbow Get Play with Dwight Howard. Mike D’Antoni has already coached Dwight Howard once and will have learned from his mistakes. Both of them will have changed, but Harden is a capable, elite scorer in his prime. Ty Lawson can run a high octane offense and you only have to look at George Karl’s last year with the Denver Nuggets to see that. The guy was the Coach of the Year and got fired. That’s the NBA. 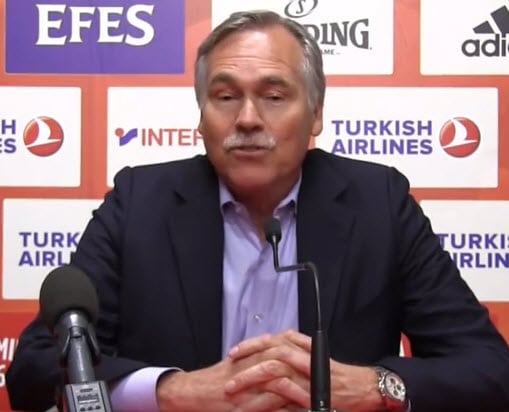 This Mike D’Antoni Houston Rockets Elbow Get Play is the perfect way for them to use Dwight Howard. The Houston Rockets could bring in Former Rockets coach Jeff Van Gundy, former Bulls coach Tom Thibodeau and current Hornets coach Steve Clifford are the early candidates for the job, according to Yahoo Sports. Houston promoted assistant J.B. Bickerstaff to interim coach, and he’ll have the chance to secure the job on a full-time basis, according to Yahoo.

Mike D’Antoni was the Godfather of “Pace and Space”. Brad Stevens and Steve Kerr are using his concepts. Stephen Curry shoots it better than Steve Nash, but they use the same type of players. Draymond Green can guard inside, outside, plays a little bit like Shawn Marion. Everyone has their strengths and weakness and everybody’s a little different, but they played a very similar style that we tried to play in Phoenix.