Next up in previewing the Olympic Qualifying Tournaments is a look at the Mexico National Basketball Team. Mexico will play in the Olympic Qualifying Tournament in Italy on July 4th – 9th. There are two other qualifying tournaments, one is Serbia and one in the Philippines. The winners of these three tournaments will join the nine nations that have already qualified for the Olympics in Rio. To earn an Olympic appearance, Mexico will have to beat out Croatia, Greece, Iran, Italy, and Tunisia.

Mexico is coached by Spanish born Sergio Valdeolmillos. He has been the coach for Mexico two different times, including a stint from 2011-2014 and from 2015 to the present. Valdeolmillos is also the head coach for Movistar Estudiantes in Spain. He has coached several clubs since 1993 when he got his coaching start with CB Huelva 76. Valdeolmillos led Mexico to a Gold Medal at the 2013 FIBA Americas Championship and a 4th place finish in the 2015 FIBA Americas Championship. The 1st and 4th place finishes are the two best finishes in FIBA Americas history for Mexico.

In the 2015 FIBA Americas Championship, Mexico finished in fourth place going 7-3. In group play, Mexico went 4-0 winning against Dominican Republic, Panama, Uruguay, and Brazil. In the second round, they went 6-1 (tied with Canada and Argentina) advancing to the final round. In the semifinals, Mexico lost to Argentina and then lost in the third place game to Canada. The third place game was a thriller with several late game baskets made by both sides, but the final shot was made by Canadian player Cory Joseph to give Canada the win. The fourth place finish allowed Mexico to play in the Olympic Qualifying Tournaments for a chance to make it to Rio in August. From FIBA Americas, Venezuela and Argentina earned automatic bids to the Olympics. With the fourth place finish, Mexico remained at number 19 in the FIBA World Rankings.

The current roster includes the following players: Israel Gutierrez, Hector Hernandez, Francisco Cruz, Orlando Mendez, Jorge Gutierrez, and Gustavo Ayon. Israel Gutierrez plays for Halcones Rojos Veracruz in the Liga Nacional de Balancesto Profesional (LNBP) in Mexico. Hernandez most recently played for Maccabi Haifa in Israel and played for Fresno State in college from 2004 to 2008. Cruz is a shooting guard who plays for VEF Riga in Latvia and also played college basketball in the United States (Western Nebraska CC and Wyoming). Mendez most recently played for Halcones UV Xalapa in the LNPB and played at Western Kentucky from 2005 to 2009. He is from San Antonio and has dual citizenship.

Jorge Gutierrez is currently on the Charlotte Hornets roster and has also played for the Milwaukee Bucks, Brooklyn Nets, and Canton Charge (in the NBA D-League). He wwas named to the All-NBA D-League Second team in 2014 and also to the NBA D-League All-Defensive First Team in 2013 and 2014. Ayon plays for Real Madrid, but spent several years in the NBA playing for New Orleans, Orlando, Milwaukee, and Atlanta. He was the Spanish Cup MVP in 2016 and was also named to the All-Euroleague Second Team in 2016. Ayon played very well in the 2015 FIBA Americas Tournament for Mexico. In the video, you will see a great lob dunk play from Ayon. Below are some video highlights from each player.

Below is a video showing seven plays used by Mexico against Canada in the FIBA Americas Tournament in 2015. This was the third place game and Mexico lost on a buzzer beater made by Canadian player Cory Joseph. Mexico uses ball-screens very well, especially high ball-screens. A unique aspect to the Mexico offense is the use of the “short roll” in ball-screen situations. Instead of a typical roll and replace action, they send the second big on a short roll under the basket in high pick and roll situations.

In this play, 2 cuts up to the top of the key and gets a ball-screen from 4 on the catch. As 2 drives left, 4 rolls into the lane and 5 makes a short roll under the basket. The short roll gives 2 the option to pass to either 4 or 5 depending on which post defender helps on the ball-screen penetration. 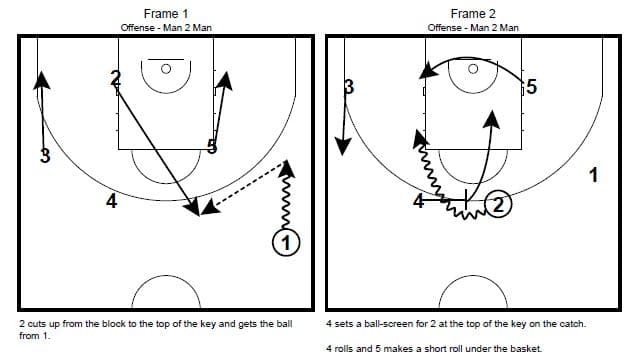 This play is similar to the Slice PNR play, but instead of 2 cutting from the opposite side he makes a zipper cut off of 4 on the ball side. On the catch, 2 gets a ball-screen from 5. 5 rolls and 4 makes a short roll under the basket to the left block. 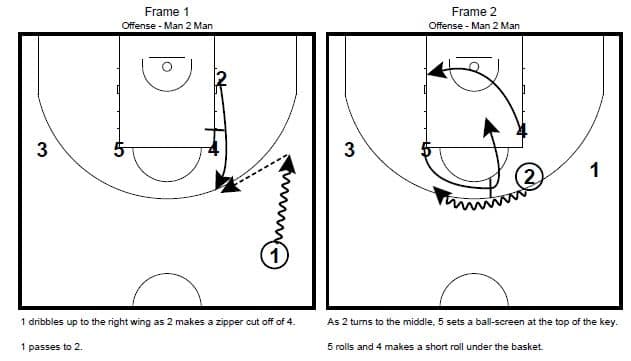 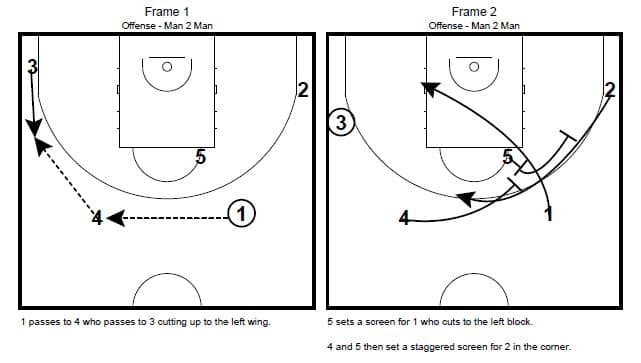 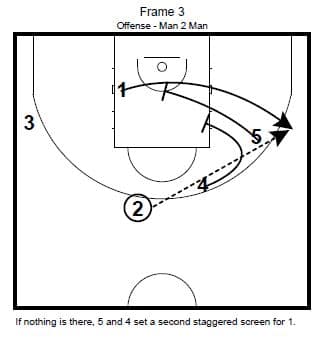 This play is a counter to the shuffle stagger play with 1 drifting out to the top of the key instead of using a shuffle cut. Once 1 has the ball, 4 and 5 set a staggered screen for 3 who cuts to the wing for a shot. 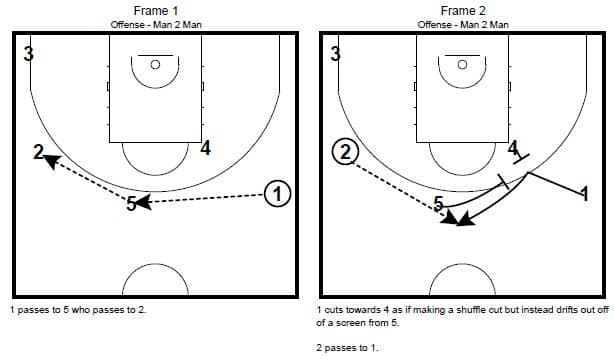 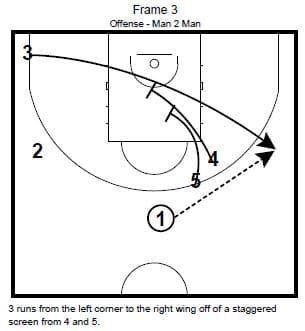 1 gives the ball to 2 with a dribble handoff. 2 then dribbles middle off of a high ball-screen from 5. 1 clears the way for 5 to roll by moving out to the left corner. Mexico is able to get a layup off of the action. 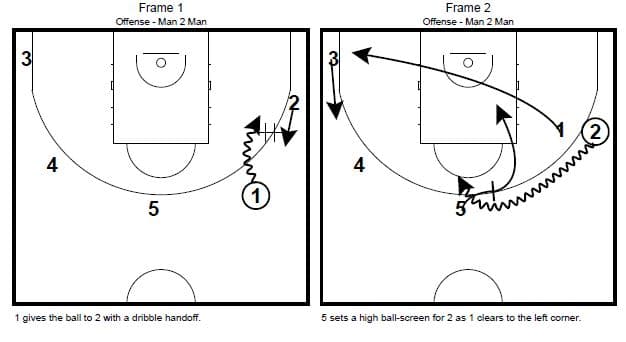 This play is a counter to the DHO play. Instead of 1 handing off the ball to 2, he uses the high ball-screen from 5. 5 rolls to the rim as 2 lifts up from the corner to the right wing. 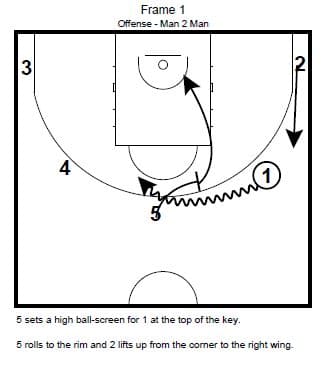 In this sideline out-of-bounds play, 2 makes a zipper cut off of 5. Once 2 has the ball, 5 follows the action to set a ball-screen for 2. 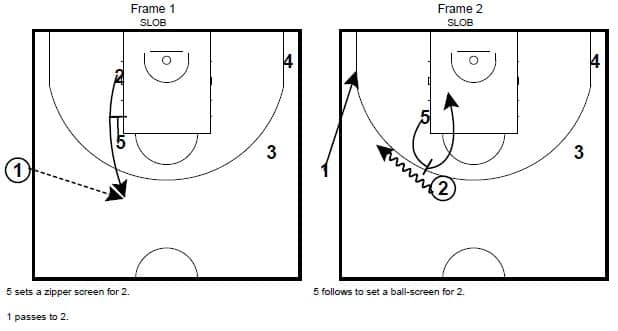