The Matt Painter Purdue Boilermakers got an 82-81 overtime win over Tom Izzo and Michigan State University.  The Matt Painter Purdue Boilermakers used this Transition Offense Double Stagger with great success.  It’s something that we thought that we would share with you.  Tom Izzo is kicking himself right now still.  The Michigan State Spartans had a chance to beat the Purdue team after a shot clock violation with nine second left and the score tied.

In the past, Tom Izzo has usually called time-out before such a play, but he opted to let his team play through with a timeout.  The results were a long fadeaway jumper by Denzel Valentine that was off as time time expired.  Coach Izzo said he chose to not call time-out because it wouldn’t let the Matt Painter Purdue Boilermakers set up on defense.  He admitted that he botched his late game strategy in response to the criticism.

Now that standing… Michigan state was down two in regulation with 21 seconds late so Tom Izzo did call a time-out.  That resulted in a made Valentine layup, one that went in despite three defenders in the paint. It left Purdue coach Matt Painter impressed. 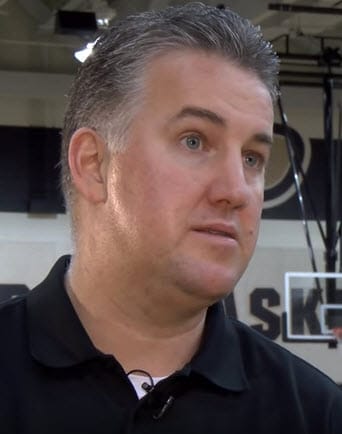 “He made an unbelievable drive to tie the game up,” Matt Painter said of Valentine. “He takes on three people and he spins the ball backwards…It’s an unbelievable shot. He’s made himself into an NBA player.”

The Boilermakers (20-5) feature “The Skyline,” centers A.J. Hammons (7-foot) and Isaac Haas (7-2) and 6-9 power forward Caleb Swanigan, the former Homestead standout. They play the Michigan Wolverines tonight. The winner of this game will be well positioned for the Big Ten tournament’s No. 4 seed and the accompanying double-bye into the March 11 quarterfinals in Indianapolis’ Bankers Life Fieldhouse.