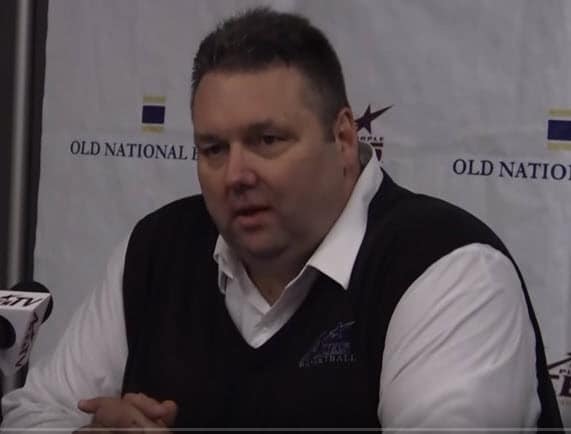 The Marty Simmons Evansville Aces were bounced out of an opportunity to go to the NCAA Tournament by Norther Iowa. Wes Washpun from Northern Iowa shot the ball that hit the top of the key and bounced high back off the rim and fell in at the buzzer to give the UNI Parnthers, a 56-54 victory over the Marty Simmons Evansville Aces in the Missouri Valley Conference Tournament championship game.

They dispatched the Evansvill Aces (25-9) for the third time this season by a total of seven points. Can you say that it was close? The Purple Aces shot 23 percent in the first half, 50 percent in the second half. Egidiju Mockevicius had 18 rebounds.

The Marty Simmons Evansville Ace will have a chance to play in the NIT. Last year, they won the CIT.

The UNI Panthers just played a lot harder, we had better rhythm and I just thought we played faster. Those are all things, we certainly wanted to do in the first half. No excuses will come out of this team.

I love the action from the Marty Simmons Evansville Aces Lob Set Play and it’s got enough mis-direction in it that the defense won’t see what is coming. It’s a great momentum changer.

The Purple Aces (25-9) went to the championship game for the first time since 1999 and has never won the MVC Tournament and was seeking its first berth in the NCAA Tournament since 1999 when it lost to Kansas in the first round.

The Purple Aces have played in five NCAA Tournaments, their lone win coming over Oregon State in 1989.