Here is the Steve Wojciechowski Marquette Golden Eagles UCLA Euro Set Play. His Golden Eagles are off to a 7-2 start this season and play a tough in-state contest against Wisconsin later this week. Marquette has already beaten some good teams this season including Fresno State, Georgia, and Vanderbilt. They will play Saint Francis (PA) and SIUE to finish up non-conference play before taking on Georgetown at home on December 28th for the first Big East Conference game. Marquette has a pretty balanced scoring attack with four players averaging double figures. The scoring leader is Jajuan Johnson with 14.4 points per game. They have some very strong three point shooters as well with Sam Hauser shooting 52% on 23/44 shooting and Markus Howard shooting 50% on 18/36. In the last win over Fresno State, Sam Hauser led the way in scoring with 19 points (4/6 from 3-point range) followed by Luke Fischer with 18 points, Jajuan Johnson with 14 points, and both Markus Howard and Andrew Rowsey with 10 points each. With the 7-2 start, Wojchiechowski has a 40-34 career record as a head coach in 2+ seasons.

This play starts with a 4 out / 1 in formation and the 5 man at the high post. 1 passes to 2 on the wing then makes a UCLA cut to the block. 5 steps out to set a ball screen for 2. If nothing is there as 2 drives middle, he kicks it out to 4. On the catch, 4 turns as 3 goes back door and 1 cuts up for a pass/ball screen or dribble handoff. This continuous action goes right into the European ball screen offense with a back screen / ball screen (or DHO) combination on both sides of the floor. 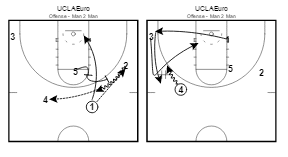