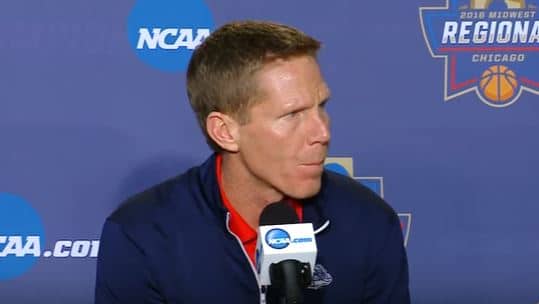 Attached are two baseline out-of-bounds plays from Gonzaga Bulldogs Head Coach Mark Few. These plays were used in the 2016 NCAA Tournament against Syracuse and Seton Hall. Gonzaga went 28-8 this season and made it to the Sweet 16. The Bulldogs tied for 1st in the WCC with a 15-3 record. Gonzaga shocked the NCAA Tournament field making it to the Sweet 16 as a #11 seed. Mark Few just finished his 17th season as Head Coach of Gonzaga and has won 466 games during that time. Gonzaga has finished 1st or 2nd in the WCC since 1999 and finished 1st 15 seasons. Mark Few has been a part of the Gonzaga program since 1989. He started as a Graduate Assistant and then was an assistant coahc from 1990 to 1999. He worked under Dan Monson and took over as Head Coach when Monson left to coach at Minnesota.

The first BLOB gets the ball in against Syracuse’s zone defense. The second BLOB is an isolation play for Sabonis on the block.

Gonzaga dives 4 into the lane and out to the corner, 2 cuts out to the wing, and 5 looks for a quick cut to the block. If nothing is there, 1 passes out to 3 then cuts to the left corner. If the rotations work, 1 may have an open shot in the corner. If not, Gonzaga gets into a zone offense. 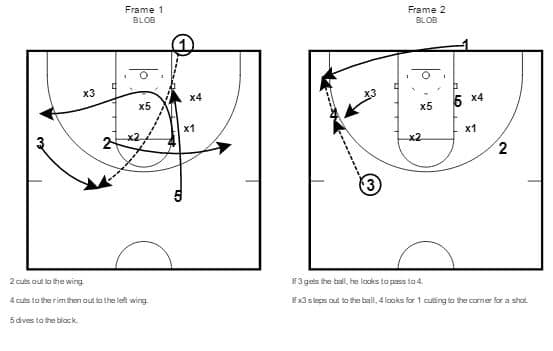 This quick hitting baseline out-of-bounds play throws the ball into Sabonis at the block. 4 moves out of the way to the left corner allowing Sabonis to go to work. With the lane cleared, he can make a move towards the baseline or to the middle of the floor. 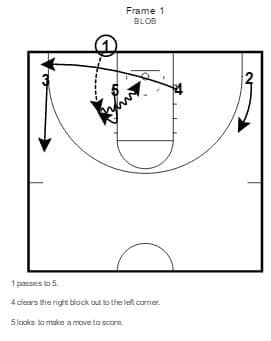