The Mark Few Gonzaga University Zags Continuity Offense needs to regain it’s offensive prowess with Przemek Karnowski missing. The next game against NCAA D2 St. Martin should give them an opportunity to regain their ryhthm. They have lost a pair to Pac-12 oponents in their past three contests.

Gonzaga (6-3) averaged 81.2 points and 51.0 percent shooting while connecting on 38.4 percent of its 3-pointers in the first five games. Since Karnowski has been dealing with back spasms, the Bulldogs have seen their scoring output drop to 64.8 in the past four contests while shooting 42.1 percent and 26.7 from beyond the arc.

Their 41 percent shooting has proved just enough of a problem in the 71-66 loss to UCLA on Saturday. Four Bulldogs scored in double figures, led by Kyle Wiltjer with 20 points and Domantas Sabonis with 18, but they also had four who totaled four points on 2-for-11 shooting. 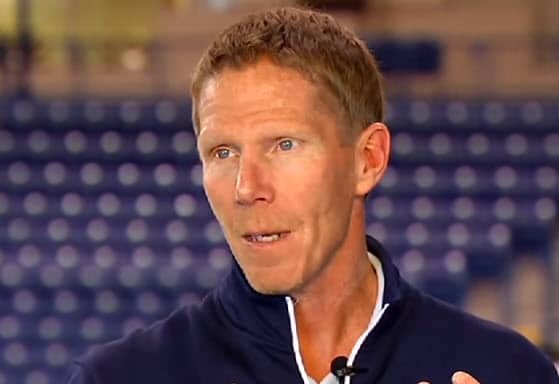 Gonzaga’s last three games have been decided by a combined 13 points, with a 68-63 loss to then-No. 19 Arizona on Dec. 5 and a 61-58 victory against a 3-5 Montana on Tuesday. It will likely have to endure Karnowski’s absence for at least a few more games as his ailment has reportedly kept him from even sitting on the bench.

Karnowski is HUGE. He is not only their best player, but most valuable too. Offensively, he is a load that people have to deal with and he is one of their best passer.

The Mark Few Gonzaga University Zags Continuity Offense is a pick and roll continuity offense with a few set plays, and some European flair. Mark Few is one of the best X’s and O’s coaches in college game, and he will have his team executing at mid-season form once their conference games start.

Let us take a look at the formula that could finally take the Zags to the Final Four.