Here are four set plays from Boise State Head Coach Leon Rice. Rice just completed his 5th season at Boise State, where he has won 102 games to 63 losses. He has won 21 or more games in 4 out of 5 seasons with a career best 25 wins this past season. Rice came to Boise from Gonzaga where he served as an assistant coach from 1998 – 2010. Before that, Rice was an assistant coach at Yakima Valley CC, Northern Colorado, and Oregon. In 2014-2015, the Broncos finished 14-4 in the Mountain West Conference which put them in a tie for first place in the conference standings. 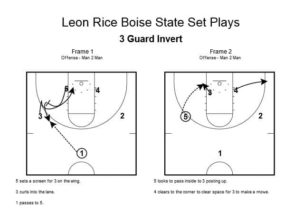