The Larry Krystkowiak Utah Utes offensive system comes from his experience in the NBA so they run an NBA Early Offense and NBA Style Set Plays. Here is a twist off their early offense which we’ve seen in previous plays. This time, they make use of the side pick and roll to set-up a double stagger action for the shooter. The Larry Krystkowiak Utah Utes Offensive system has multiple actions going on at once forcing the defense to really consider what their strategy will have to be in guarding them.

The Larry Krystkowiak Utah Utes system is built on outscoring the opposition, defendeding, and rebounding well. That’s why they enter tonight’s game against Stanford on the heels of consecutive victories over Oregon State, Washington State, Washington and California — holding all four opponents to an average of 41.6 percent shooting from the field and outrebounding each by five per game.

Their streak began after a 77-9 loss to the Oregon Ducks who shot 599 percent that night and won the battle on the boards by a margin of 37-31.

The Utah Utes dropped to 1-3 in Pac-12 plays with the loss, but they are finally emerging from the pack in the tightly contested conference. 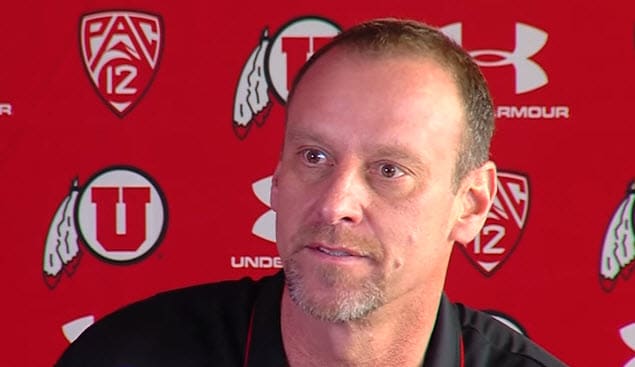 Larry Krystkowiak made a comment to the reporters yesterday that his team needed to respect the game and play both ends of the floor for the basketball gods. It seems to be working for them.

After wednesday’s 73-64 win over Cal, everyone seemed to understand the rotations and who to double team. Krystkowiak said that his team needs to understand that the game of basketball is much different from football where you can send 11 guys out and they can strap on a chin strap and they take a lot of pride in stopping the other team,” said Krystkowiak, who acknowledged that statistics play a big part. “You have to have that same kind of pride in basketball. We talk about it a lot.”

Shifting gears on the fly is the biggest thing for them which is guarding their opponenet. They seem to doing that a lot better now.