More common in college than the pros is the usage of a “5-out” offensive scheme, which opens up the paint by sucking all the defenders onto the perimeter. Most of the teams that use a “5-out” offense either have a team of 4 or 5 guards; rarely do you see two big men out on the perimeter. When looking at college plays, I’m always fascinated to see which coaches use the most creative “5-out” types of motions or set plays – finding a pattern of movement entirely on the perimeter that has good flow and spacing is often difficult.

Kevin Stallings of the Vanderbilt Commodores has utilized some great shooters over his tenure. A few seasons ago he also had Festus Ezeli, a tree of a big man who was very effective as a screener, and didn’t utilize him as much as a primary option in the post. Ezeli wasn’t needed as a primary scorer with other NBA-level talents such as Jeffery Taylor and John Jenkins. Stallings used this Vanderbilt Commodores play, Pin Reverse Fade, to open up his shooters while always leaving the possibility for an entry to Ezeli off a roll or slip of a pick. 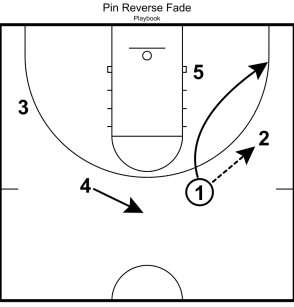 Ezeli (5) starts this play in the post. The other four perimeter players were usually interchangeable, with a power forward, or 4, usually trailing the play to the spot indicated above opposite of Ezeli. For this play, Jenkins is the 2 and Taylor is the 3. Brad Tinsley, usually the PG, would start as the 1 and pass to Jenkins on the wing, then cut through to the same side corner, creating a triangle overload momentarily. 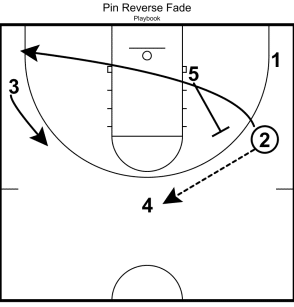 Jenkins would reverse to the trailer (usually Lance Gouldbourne) at the top. Ezeli would then set a backscreen for Jenkins to cut to the rim. If Taylor was ever in the 2 on this wing, it would be a great look for an alley oop. Instead, Jenkins cuts through to the opposite corner and Taylor raises towards the ball. 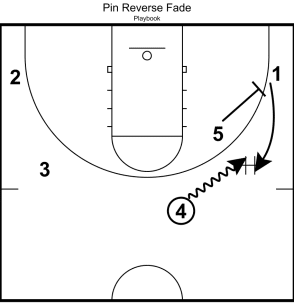 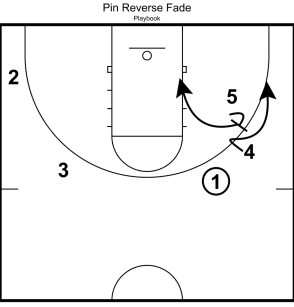 Figure three shows Ezeli, immediately after he sets the backscreen for Jenkins, turning and setting a free screen for 1. 1 will then raise into a dribble handoff with the 4. Ezeli then sets a flare screen for 4 to the corner and then dives hard to the basket. 1 has the option to hit Ezeli on the slip or pass to 4 for a three pointer in the corner.

There are three consecutive screens set by Ezeli, and he has the option to slip any one of them and be in good position to catch a leading pass from the top of the key. I’ve seen him slip after the backscreen, after the freescreen he makes a baseline cut, and slip the flare into a dunk at the rim.

If you’re familiar with the Vanderbilt Commodores or the Golden State Warriors you will hear about what a high basketball IQ Festus Ezeli has for a big man. Stallings allowed him to read and react throughout his final season with the Vanderbilt Commodores and the offense opened up as a result. Great shooters and natural scorers like Taylor and Jenkins utilized the ballscreen options well.

You’ll notice the play doesn’t take up a full 35 seconds in a shot clock, closer to around 8-12 seconds. This allows Stallings to run a second set and use this almost like a secondary offense/ delayed break set. Smart players at Vanderbilt make this play run well, but a smart coach drew it up.