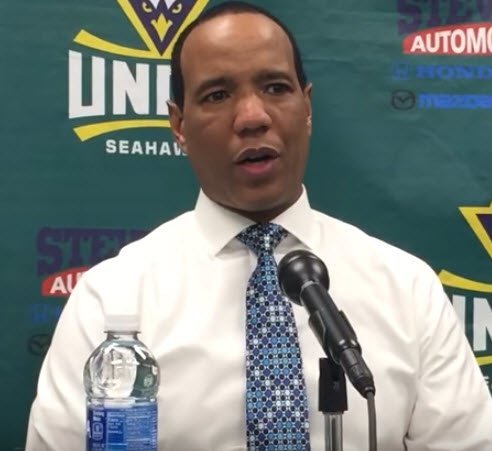 Kevin Keatts is the head coach at UNC Wilmington, and they play Virginia in the first round of the NCAA Men’s College Basketball Tournament on Thursday. Coach Keatts is the former Hargrave Miltary Prep School where he had three players sign with Virginia: Jason Clark, Mike Scott, and Keith Jenifer. Mike Scott was a first team All-ACC player for the Virginia Cavaliers.  You will enjoy these Kevin Keatts UNC Wilmington Seahawks Set Plays.

Coach Keatts knows that the University of Virginia is a great defensive team. They had a chance to be a number one seed about three weeks ago. Last year, UNC-Wilmington was a number thirteen seed last year and played Duke where the Seahawks let at the half before they lost 93-85.

UNC-Wilmington is 29-5, and they rank in the top ten in scoring offense with 85.2 points per game. Virginia which is 22-10 and ranked first in scoring defense with 55.6 points allowed. It will be a game of contrasting styles.

UNC-Wilmington plays a small ball lineup that shoots the three and spreads the floor. They almost never turn the ball over and are second in the least turnover rate in the country with 13.9.

The UNC Wilmington Seahawks have four of their five starters from last years’ team.

Kevin Keatts has a 72-27 record in his three years at UNC Wilmington, and they are in the NCAA College Basketball Tournament for the second year. The Seahawks finished last in the CAA before Coach Keatts took the job. Coach Keatts spent three years with Rick Pitino at Louisville and was the Head coach at Hargrave Miltary Academy for ten years where he won 263-17.

Kevin Keatts is a hot name right now and could be up for one of the big jobs in college basketball. He could be the “It” coach that makes a tourney run to get a big time job.

Get ready to embrace Keatts and the UNC-Wilmington Seahawks.