Here are three set plays from Mary Hardin-Baylor Head Coach Ken DeWeese. DeWeese just finished his 17th season as head coach at Mary Hardin-Baylor. In that time, he has won 321 games led the Crusaders to the NCAA Division III National Championship game in 2013 where they eventually lost to Amherst. DeWeese has over 700 wins as a college coach. He won 404 games at McLennan Community College in Waco, TX. He left MCC to become an assistant at Georgia State in 1996. He got his start at Smiley High School in 1969 and then made stops at Aransas Pass High School, Sinton High School, and Thomas Jefferson High School in Port Arthur, TX. DeWeese joined the UTEP staff from 1975-1980 as an assistant. He has been named a Conference Coach of the Year, has had 17 All-Americans, and has had 33 winning seasons.

Ken DeWeese UMHB Set Plays – Cru Zipper
1 dribbles to the right wing sending 2 on a zipper cut around 4. 1 passes to 2 and 4 moves to the opposite elbow. Once 2 has the ball, he dribbles right as 1 sets a cross-screen for 5. 4 then sets a down-screen for 1. 2 looks to pass inside to 5 or to 1 for a shot.

Ken DeWeese UMHB Set Plays – Cru Zip PNR
1 dribbles to the right wing sending 2 on a zipper cut around 4. 1 passes to 2 and 4 moves to the opposite elbow. 2 dribbles off of a ball-screen from 4 at the top of the key. 2 drives left as 4 rolls and 3 slides to the corner. 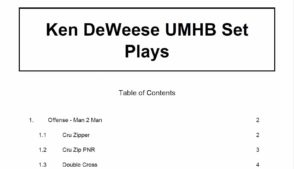