The truth is he has been gradually making himself more and more of a impact on the Spurs rotation.
You can bet that this Finals MVP award won’t be the last time we hear from Mr. Leonard.

His ability to shoot the 3, attack the paint aggressively, and finish around the rim makes him a keeper for the Spurs.
The unseen part of the story is how he is an extreme workaholic.

Even after winning the championship he didn’t partake in much celebration.
Instead it said that he is in the gym constantly continuing to perfect his craft.

This basketball scoring workout contains a sample of his all around game. The drills were made for review of his Finals performance against the Miami Heat.

All the drills in the basketball scoring workout are designed for a player to conduct on their own.
Coaches can be replaced for chairs within each drill if the opportunity allows.

Through dedication to his players and a commitment to hard work, Coach Springer has developed into one of the most sought after skill development coaches in Texas.
Passion is a understatement to the dedication he has to the game of basketball. More than anything he wants to see all players win on and off the court.

Springer’s playing career reached the collegiate level while living in New York. It was there that he learned the game under the coaching of the New York State Junior College Coach of the Year (2005-2006). It was this same coach that helped him find his passion for teaching the game.

Since arriving in San Antonio, he has helped multiple middle school and high school programs reach the district finals. He is currently the Girls Varsity Basketball Coach at Castle Hills First Baptist School. In 2011, Coach Springer led the CH Eagles to the Tapps Regional Finals and was nominated for 1A Coach of the Year.

He currently works with D1, international, NBA and WNBA players. In 2011, Tim was a coaching intern with the San Antonio Silver Stars (WNBA) and participated in much of the player development for the team. Coach Springer keeps a strong commitment to personal growth for the sake of helping others. He is a infantryman in the Army National Guard and has a Bachelor’s degree in Kinesiology. In 2012 Coach Springer was selected as a Ganon Baker certified coach and trainer. 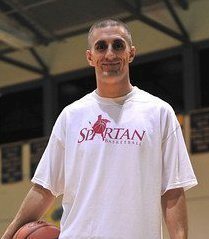