This article features five set plays from Coach Beilein’s Michigan 2 Guard Offense. Beilein has been with Michigan for nine seasons, where he was won almost 200 games as a Wolverine. Before that, Beilein was a head coach for West Virginia, Richmond, Canisius, Le Moyne, and Nazareth. In all, he has won 665 games in the NCAA and won 75 more as a Junior College Head Coach. He led Michigan to the Final Four in 2013, to a Big Ten Regular Season Championship in 2012 and 2014, and was named Big Ten Coach of the Year in 2014. He has also been named Conference Coach of the Year in two other conferences, the CAA in 1998 and the MAAC in 1994. Beilein played at Wheeling College from 1971-1975, and began coaching at the high school level once he graduated.

The Wolverines overload the floor in this play and then run into a shuffle / back screen combo to get the ball to 5 inside. 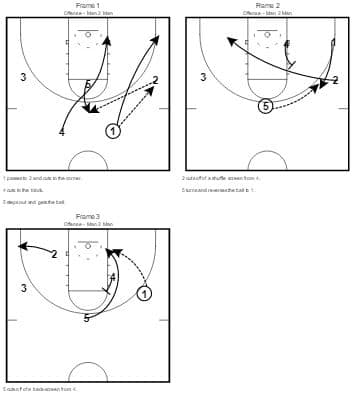 1 passes to the wing and 2 then drives towards the baseline. 1 cuts to the right as if he is clearing away, but instead cuts off of a high flare screen from 5 for a shot. 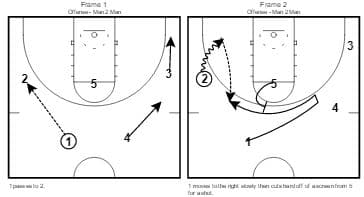 1 sets a down screen for 5 at the high post and 5 pops out to get the ball. 5 gives 3 a dribble handoff as 1 and 2 set a staggered screen for 4 in the corner. 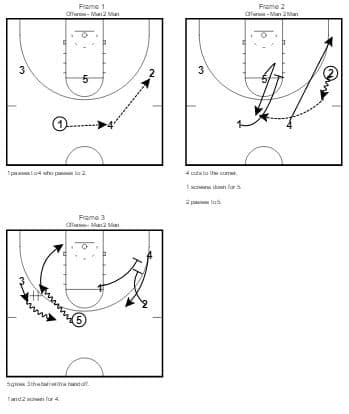 The first cuts are made and once 2 has the ball on the wing he drives middle and passes to 3. 2 cuts off of a back screen from 5 and 5 then turns to set a ball screen on the wing. 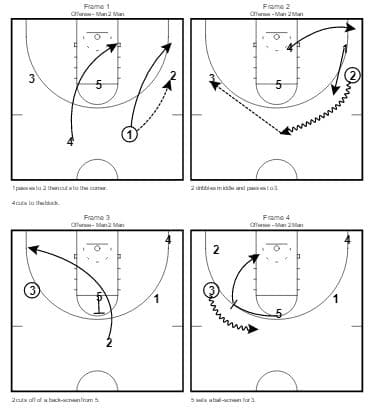 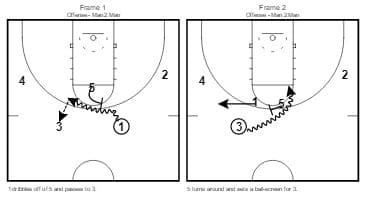