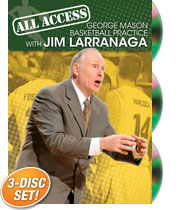 In his 14+ years at George Mason, Jim Larranaga has become the school’s and the Colonial Athletic Association’s all-time leader in wins. His brand of basketball requires discipline, execution and total commitment.

Now you have sideline access with Coach Larranaga as he leads George Mason through four practices as they prepare for a pre-season trip to Italy. Throughout all four practices, Larranaga emphasizes fast-paced play, fundamental ball skills and tough defense.

Throughout the video, Larranaga coaches and teaches his players while running his drills, offenses and defense.

Heading to the court, you will see the Patriot’s stretching and warm-up routine and how Larranaga communicates to his team what he wants to accomplish in each practice. Learn fundamental drills for dribbling, passing, and shooting. These are drills executed in a fast-paced, full court setting.

DEFENSIVE SKILLS:
Larranaga’s hard-nosed style of play also shows in the way he teaches defensive fundamentals. The skills and concepts he highlights include defensive footwork, nose on the ball, close-outs, post defense and transition defense. The drills include lane slides, guarding the ball full court, 1-on-1 closeouts, 4-on-4 Chaser and 5-on-5 conversion. He also introduces a shell drill that allows simultaneous practice of multiple offensive and defensive concepts.

SHOOTING & REBOUNDING:
Get a lot of shots from every area of the court during your practices. From 2-line lay-ups, partner shooting, 3-point shots, B.E.E.F. repeats and free throws – every shot is practiced over and over again. Larranaga also emphasizes the importance of rebounding in every drill, both offensively and defensively.

OFFENSIVE SYSTEM:
Coach Larranaga takes you through his transition game as well as some of his half court offense. See how Larranaga teaches in a whole-part-whole method as he breaks down all of his offensive systems in a 5-on-0 and 5-on-5 setting. You will see his 41 game and 42 game used in transition and in the half court. See his Chin Series in the half court and how he breaks it down using drills to instill timing and player options.

Larranaga takes his team through repetitions his zone offenses to attack the 2-3 zone, the 1-2-2 zone as well as the 1-3-1 zone. These attacks include having one post player as in 34, 34X and 41 High. And having two post players in his “321 Crack & Carve” offense.Under Jim Larranaga’s leadership, George Mason has more wins in March than any other CAA school and he has led the Patriots to heights barely imagined before his arrival – including a trip to the 2006 Final Four.

Use these ideas, concepts and drills to help run a more effective practice and reach new heights with your program.