Jim Boeheim took the Syracuse Orangemen to the Final Four this year, but reporter still try to ask him when he is going to retire. We know that Dean Smith has told Roy Williams that he retired too early and that is when his health got bad. You don’t want to retire when you have your dream job. Jim Boeheim reacted badly three years ago when reporters has him about retirement after Syracuse’s loss to Michigan in the 2013 Final Four in Atlanta. Here’s an analysis of the Syracuse Orangemen Princeton Action by coach Dana Beszczynski.

Coach Boeheim returned Syracuse to the Final Four for the first time since 2014 and they suffered an 83-66 loss to North Carolina here at NRG stadium in Houston.

Roy Williams came in after the Jim Boeheim press conference and told the reporters that they shouldn’t ask him that stupid question. Coach Jim Boeheim plans to coach at least three more years. 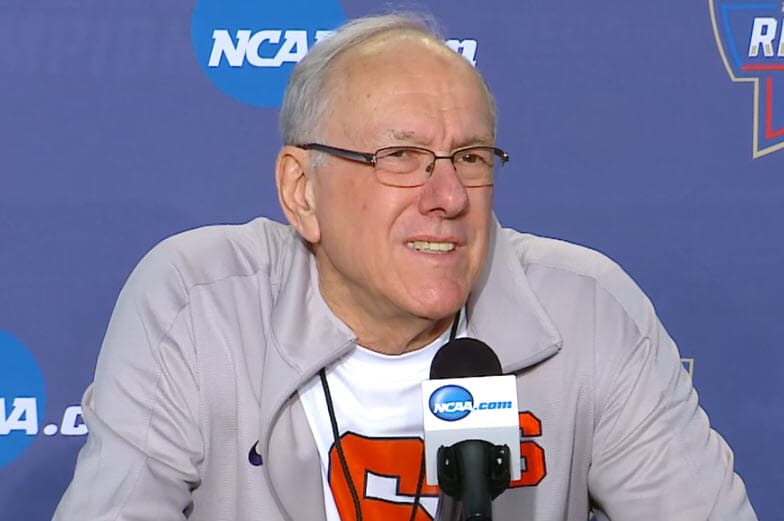 The thing is that Coach Boeheim loves coaching and molding young people. He is have more fun than he has ever had coaching this past year. I was very proud of his kids on how they got to the Final Four. They just didn’t end where he wanted them to.

I think that we need to enjoy his 2-3 matchup zone and all the things that he brings to Syracuse Basketball. A good zone is like man defense and a good man defense is like a zone. They actually match up here it’s a 2-3 look, but they are covering man.

Here is a Syracuse Orangeman Princeton Action that I think that you will like. It’s great stuff that you should put in your basketball playbook.