Jeff Hornacek recently became the head coach of the New York Knicks, inheriting a team that had the Triangle system as their offense. Hornacek did not run a lot of Triangle in Phoenix when he coached there, as he had good guards he could run pick and roll sets and pick and roll motion through. He was able to be creative with Markieff Morris at the 4 to stretch the floor and I think he could be creative with Porzingis’ shooting ability as well. You will love these Jeff Hornacek Phoenix Suns Set Plays!

Jeff Hornacek utilized his point guards shooting ability to look for a couple of options in a nice screen the screener set. The point guard passes to the ball to the wing and cuts through into the lane, and then sets a cross screen for the 5 man to cut across opposite. If the 5 man is covered or they look intentionally for the point guard, the point guard continues off a down screen from 4. When Hornacek had Morris at the 4 he would have the point guard turn after and set a down screen for the 4 man. Although I don’t believe this set would be extremely effective with Derrick Rose setting the screen, he still may get away with this set if Carmelo was in the 5 position and Porzingis would be in the 4 position (Numbers in the diagram, not actual positions). 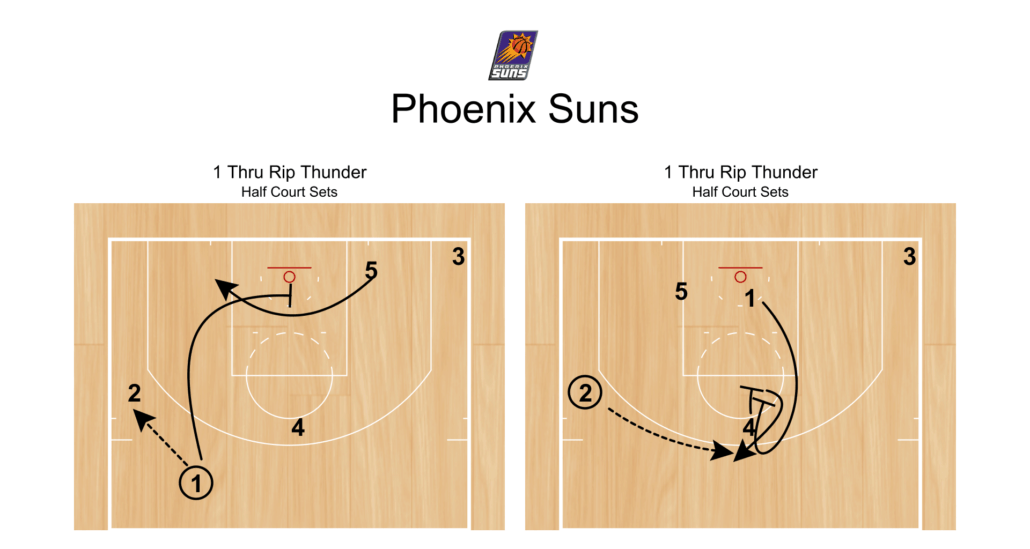 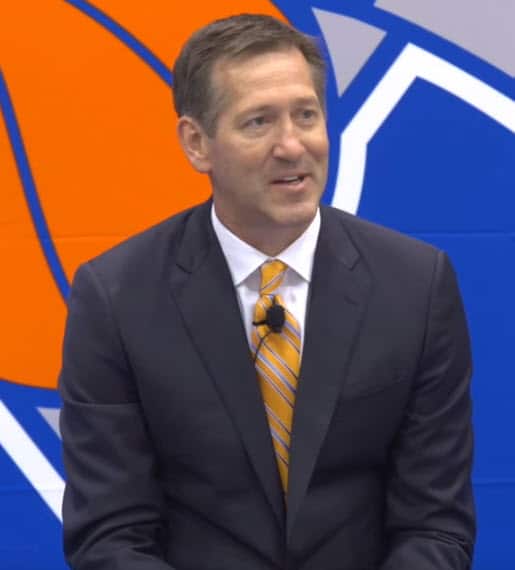 One of the common staples from the Triangle offense is the “Blind Pig” action or a drop pass off the bigs outside foot to the guard cutting backdoor. Starting off with a downscreen for the guard on the wing, 1 passes and then relocates to the opposite side. 2 then passes to the 5 man at the elbow, who then passes the blind pig pass to the point guard to attack the basket & this action works great if guards play aggressive defense on the point guard. As the point guard attacks the rim, the opposite big sets a flare screen for the guard who initially caught the pass, looking for a Hammer or Flare option to the opposite corner for a shot. I expect Hornacek to use this set or similar actions with the blind pig action from the Triangle in New York. 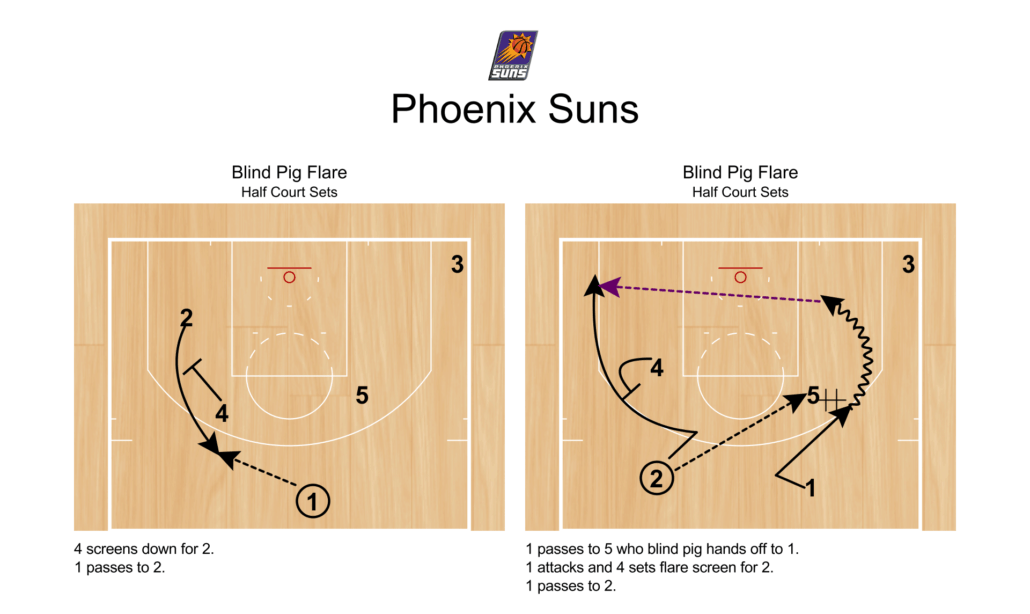 One of the more clever and effective baseline out of bounds set from the 2013-14 NBA season was a dummy option from the Phoenix Suns. The first look is for the 3 – typically an athletic leaper who has size at his position or a mismatch – to catch a lob when the defense is not looking. If the lob is covered or defended well, then 3 cuts outside toward the corner, then curls off the 4 man for a lob. If the second lob is covered, the 4 man steps out to receive a pass from the inbounder and gives the ball back through a dribble hand off for 1. 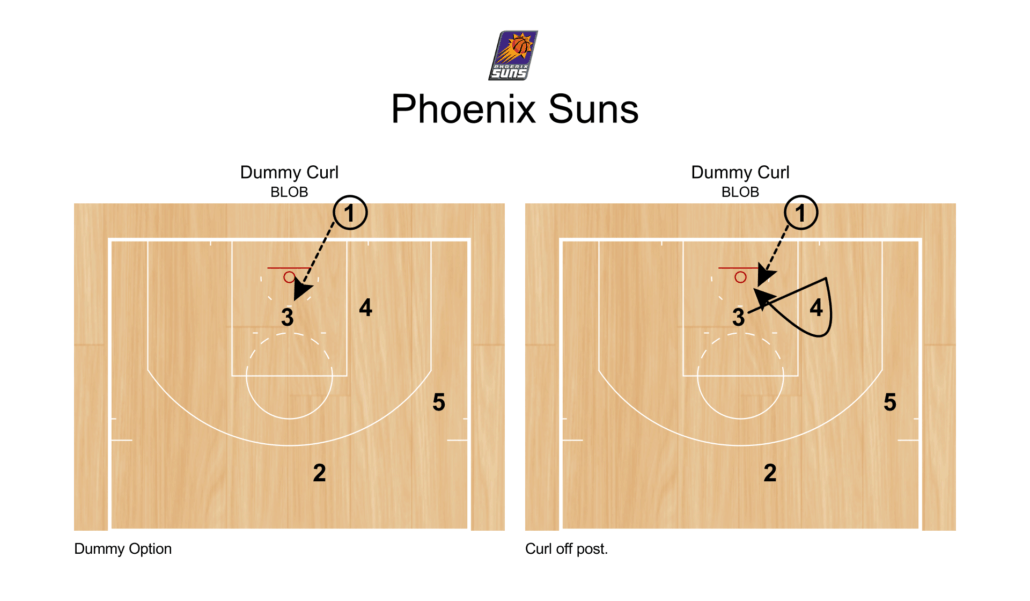 Another lob set for an athletic 3 (in this case, Gerald Green) to look to catch an easy score, typically run after a time out. 5 sets a pindown screen for the 3 who catches the pass from 1 and then flips it back quickly to the point guard. After he flips the ball back he then cuts off a backscreen from the 4 man and the point guard throws the lob pass to 3. 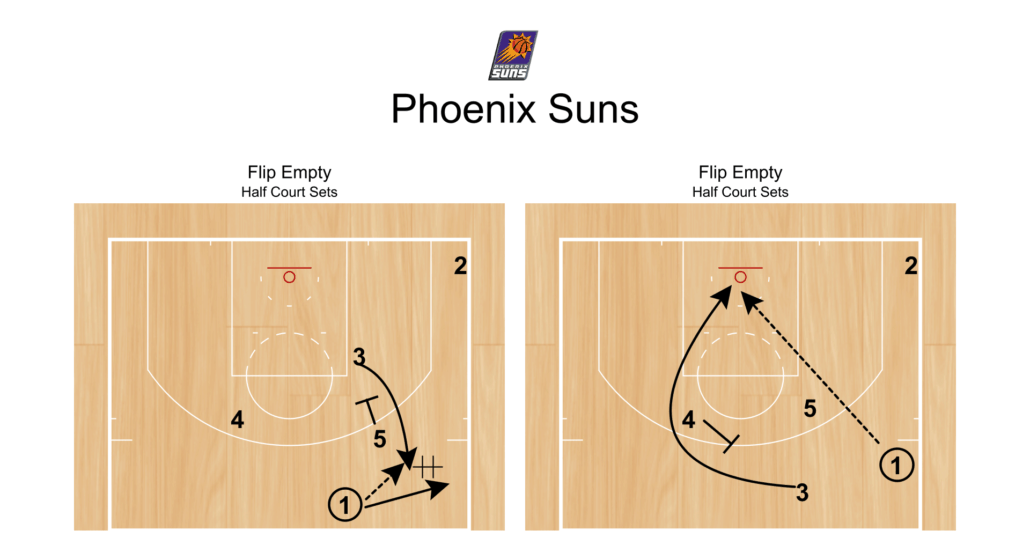 Jeff Hornacek ran a good amount of Horns sets during his time in Phoenix, but this was the most common one he ran. The point guard passes to the 4 man at the elbow and then cuts away off 5, who follows behind him for a staggered screen. As the point guard and the opposite big set a staggered screen away, the big at the elbow dribble hands off to 2 on the wing. A couple of options can occur here, as 2 can read his man and go backdoor, the 2 can attack the rim off the hand off or shoot, and the last option he can pass to 3 coming off the staggered screen opposite.