Here is a 4 flat hook set play from Iowa State Head Coach Steve Prohm. The play was clipped into video by Brandon Chambers, the video coordinator at Nevada. Prohm just finished his first season with the Cyclones, who went 23-12 and made it to the Sweet 16. Prohm came to Ames after being the head coach of the Murray State Racers from 2011-2015. In his time there, he put together a 104-29 record finishing 1st in the West Division of the Ohio Valley Conference all four seasons. The Racers went 16-0 in conference in 2014-2015 and just missed out on the NCAA Tournament. Prohm got his coaching start as a student assistant and stuent manager at Alabama as a college student. He then worked for Billy Kennedy at Centenary College in Louisiana and followed Kennedy to Southeastern Louisiana. Prohm then went to Tulane as an assistant from 2005-2006, but rejoined Kennedy in 2006 as an assistant at Murray State. Prohm was named Basketball Times Coach of the Year, Joe B Hall Coach of the Year, and NABC District 19 Coach of the Year in 2012.

Prohm liked to run Georges Niang at the 4 spot on this play. The “hook” with 3 screening for 4 (also known as a “ram” action), forces Niang’s defender to start at a disadvantage when trying to guard the ball screen up top. Often times, x4 will overshoot trying to recover and will jump out to the right (to the left on the diagram) to try to help on the ball screen. Since Niang is so versatile, he simply pops out to the right and has no one guarding him. This can be a shot or drive by Niang. 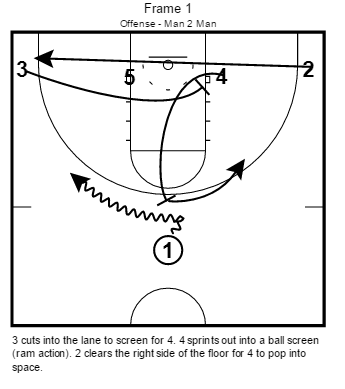