Coach Gregg Popovich was very unimpressed with how the San Antonio Spurs played on sunday. He said that they beat a depleted Memphis Grizzlies squad in Game 1 of their opening round series, but he was unwilling to lay out a path to the NBA Championship in June or declined to start planning a victory parade in San Antonio.  Here is something that I gained from the game and it was an option of the San Antonio Spurs Secondary Break.

The San Antonio Spurs Secondary Break “Dribble across” action has great movement and  they get a 3 point shot in the corner.

Coach Popovich mentioned that he is scared, because you have Golden State out there, the Clippers, the Rockets, the OKC Thunder and they haven’t gotten through Memphis yet. They had one great game against a injured team and he wasn’t impressed with that. Coach Popovich is hard to please, but he is right in the fact that Memphis was able to keep it close for much of the first half. They just need to have a sense of urgency and step on the throat of the Memphis Grizzlies. If they can sustain some sense of urgency early on and then try to sustain it, they will be in a great position. 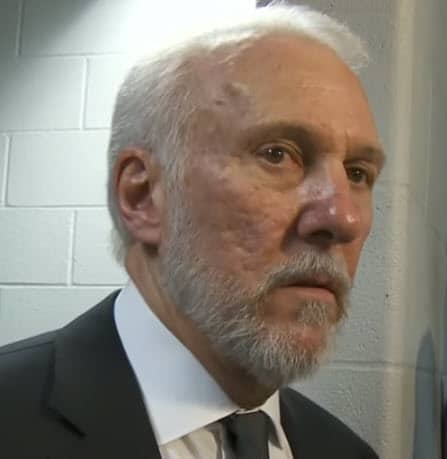 Defense is another reason that they are winning this year and Kawhi Leonard has something to do with it. Sunday’s win was the fifth-largest in Spurs’ playoff history. Since acquiring Leonard and changing the shape of the team after the 2011 playoffs, the Spurs have notched seven of their 12 largest playoff margins of victory.