Included are two stagger plays from Wichita State Head Coach Gregg Marshall. Marshall just completedhis 8th year as head coach at Wichita State and 17th year overall. In 17 years, he has compiled a 398-159record (winning just over 71% of his games). Before taking over in Wichita, Marshall was the head coachat Winthrop from 1998 – 2007. While at Winthrop, he never had a losing season and won 20+ games 6times. Marshall, a graduate of Randolph-Macon, started his coaching career after graduating fromRandolph-Macon in 1985. He started as an assistant at his alma mater and then worked assistant jobs atBelmont Abbey, College of Charleston, and Marshall before becoming a head coach. He has led theShockers to 4 straight NCAA Tournament appearances, including a Final Four appearance in 2013 and aSweet 16 run in 2015.

Gregg Marshall Wichita State Stagger Plays – Shocker Stagger
1 dribbles left and passes to 3. After the pass, 1 makes a cut off of a back-screen from 5. 4 moves acrossthe lane to the opposite block. 3 looks to pass inside to 4 or hit 1 for a lob pass. If neither option is open,1 and 5 set a staggered down-screen for 2. 2 cuts to the top of the key for a shot. If 2 doesn’t have ashot, 5 sets a ball-screen at the top of the key as 3 cuts across the baseline off of a staggered screenfrom 4 and 1. 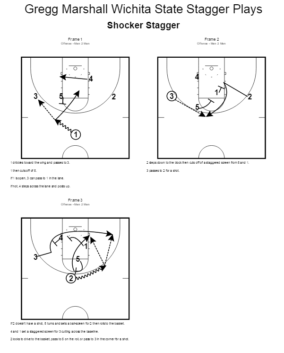