Here is a set play from Creighton Head Coach Greg McDermott. McDermott has been at Creighton since 2010, and has been a Head Coach since 1994. In 22 years, he has a 421-267 record and a 141-72 record at Creighton. McDermott played at Northern Iowa from 1983-1988 and started his coaching career as an assistant at North Dakota in 1989. He then was the Head Coach at Wayne State in Nebraska from 1994-2000 before taking over as Head Coach at North Dakota State for one season. He then coached at his alma mater, Northern Iowa, from 2001-2006 before taking over at Iowa State in 2006. This playbook features a loop pick and roll play by Coach McDermott.

This play starts with 4 and 5 on the blocks and 1 dribbling to the left wing. As the point guard is dribbling left, 3 moves down underneath 4 at the left block and 2 loops around 5 to cut to the top of the key. 1 passes to 2, and just as 2 catches the ball 5 moves out to set a ball screen. The ball screen is set for 2 to dribble to the open space in the corner and towards the rim. On the ball screen, 5 rolls and 4 replaces 5 from the opposite block. 3 moves out to the left corner to get out of the way for the roll/replace action. If nothing is there for 2 on the drive or roll, 2 should look to pass to 4 cutting high for the high low. If 5’s defender has to guard the post on the high side, 5 can seal for the high low pass from 4. If that’s not there, 4 can pass to either 2 or 1 and follow to set a second ball screen in the play. For variation, 4 can give the ball to either of those players with a dribble handoff as well. 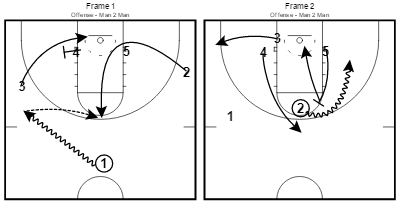