Here are some Mark Few Gonzaga Bulldogs Post Set Plays that they ran in the National Championship game! 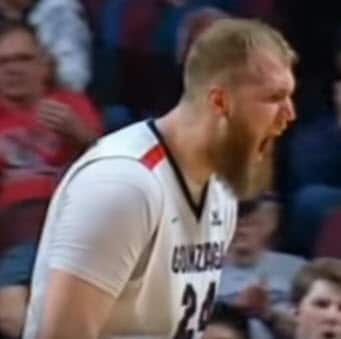 I thought that Gonzaga was going to win the National Championship because its offense was tremendous against Xavier. Gonzaga also had an elite defense to go with its elite offense to match it.

The Gonzaga Bulldogs have been ranked in the top five and also the number one slot since New years. This team was the best team that Mark Few has the field in his 18 years at Gonzaga. It’s also the farthest that any of his teams has ever gotten in the NCAA Tournament. This year has been a HUGE success for them.

Most people didn’t know that defense has been the strength of the Gonzaga Bulldogs all season. The Bulldogs have the best one in the nation as they stopped Xavier in their tracks in the Elite Eight. The offense has been great, but the Zag’s defense is what got them to the National Championship Game.

Gonzaga scored 1.17 points per possession against Xavier. They shot the ball 57.3 percent too. Gonzaga had a lot of great offensive games this year, but one of their best games was against a strong Saint Mary’s defense back at the first of the year. Gonzaga’s offense struck fear into everyone at the Final Four this year.

When Gonzaga was scoring a lot, and they had the best team in college basketball this year. They had the best defense in the country and had no letdown games. The Zags and Tar Heels had a horrible game in the second half because of the referees.

I think that you will learn a lot about from the Gonzaga Bulldogs Post Set Plays today.

← Prev: The Bill Self Kansas Jayhawks Skill Development Shooting Drills can make your guards better! Next: One of the best basketball games tonight is the Boston Celtics playing the Milwaukee Bucks! →