Picked this Golden State Warriors Quick Hitter up after a recent GSW win versus the Sacramento Kings. Besides their unselfish play and ball movement, one thing I’m impressed with is the Warriors’ after time out execution. Most teams run a set specifically for after time out situations as the opposition may be caught off guard since the play is drawn up in the huddle rather than called and most times won’t be called out by the defense.

Golden State Warriors Quick Hitter -Diagram 1– In this play, the Warriors begin with a “Horns” look with Steph Curry (#30) on the point,  Andrew Bogut (#12) and Draymond Green (#23) at the high elbow spots and Klay Thompson (#11) and Harrison Barnes (#40) spaced wide in each corner. Because of both Thompson and Barnes’ shooting ability and the ball being in the center of the floor, it’s hard for the defense to help from either corner 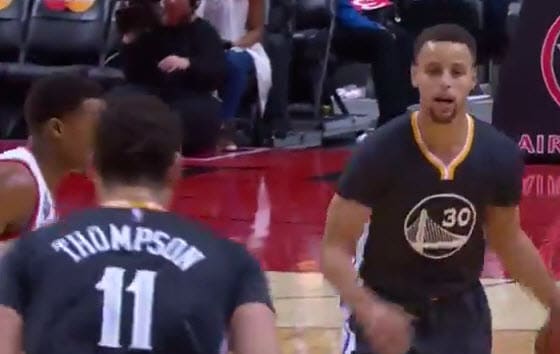 Golden State Warriors Quick Hitter – Diagram 2- This particular play, the Warriors are getting Draymond Green a shot so Steph Curry will enter the ball into Bogut (#12). Steph will then shallow cut and crack back setting a back screen on Green’s defender.

Of course we know the Warriors shoot the ball well and share it even better but when you take time to watch them play, you’ll see they’re success is more than just three pointers and Steph Curry’s dribbling abilities.