This post will look at two full court early offense plays to get a quick score in transition. The diagrams include the full court to show you where the ball is thrown in and how the players move up the court and into the play. This could also be considered a secondary offense or secondary break, depending on your own terminology. The players understand the plays as designated early actions in the offense to try to score quickly and seamlessly out of transition. When I was at Colorado College, we had three or four early offense sets to run. If none of those options were there, we would go into our motion or sets. Often we wouldn’t run the secondary options at all and would go straight into motion or set plays. These early offense options can serve as a base for your players to go into if you haven’t called what to go into. The point guard can have flexibility to call whichever early offense option he believes will work best that play. 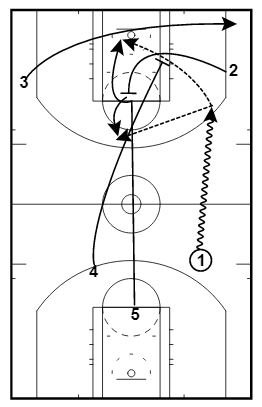 4 throws the ball in and 1 dribbles up the right side of the floor. Both 5 and 4 move into the lane to set a staggered screen for 2 as 2 and 3 are running through the lane. 2 cuts to the top of the key for a shot. 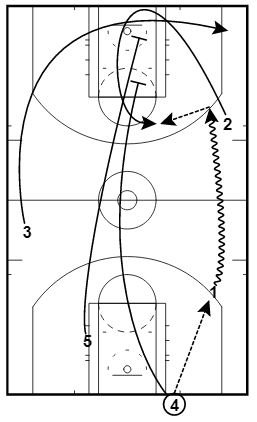