I love how Coach Hoiberg talks chemistry and not x’s and o’s in this video. The fact that the team has to police themselves and not take things “personal”. That they have to ask questions so everyone is on the same page. Being on the same page is crucial for any good team. I don’t care if you are talking chemistry or x’s and o’s. Coach Hoiberg is pretty specific in how he wants the players to run his system. The Fred Hoiberg Iowa State Offensive System is so effect, because he communicates with his team.

The first thing that I noticed about the Fred Hoiberg Iowa State Offensive System is that they run “Drags”. Mike D’Antoni was HUGE on running drags and double drags in the NBA. He got the ball rolling with the Phoenix Suns. You will notice that there is an inside-outside game to all these set plays. The “Thru Push Fence” is one of my favorite three point shot plays. You will need to check that out. 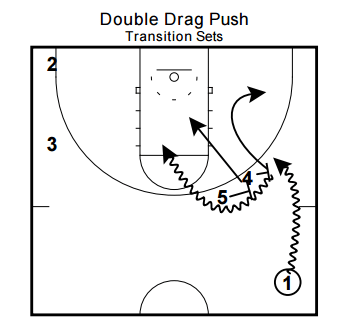 The key points of his offensive system are emphasis on spacing, opening lanes for play-maker and forcing the defense to make decisions. The primary and secondary actions are drilled on the court in 5 on 0 and 5 on 5 situations. His primary break purpose is to spread the floor for his wings and posts. He wants to to create space for his big men by running the floor. Coach Hoiberg’s transition offense is a well-spaced disciplined fast break that leave defenses out of position and one step behind the offense.