Here is s set play from Orlando Magic Head Coach Frank Vogel used in the NBA pre-season. Vogel took over for the Magic this year after spending 2011-2016 as the Head Coach of the Indiana Pacers. Vogel started coaching in 2001 with the Boston Celtics as an assistant, and moved on to be an assistant for the Philadelphis 76ers in 2004-2005. He was then an advanced scout for the Los Angeles Lakers and Washington Wizards the next two seasons, and joined the Pacers organization as an assistant in 2007. Vogel’s best season came in 2013-2015 when the Pacers compiled a 56-26 record and finished first in the Central Division. That season was the second straight year of losing in the Eastern Conference Finals. In his six seasons with the Pacers, they made the players in 5 of 6 seasons and he posted a winning record in all but one season. The current Orlando Magic roster that Vogel will get to coach this year includes D.J. Augustin, Bismack Biyombo, Aaron Gordon, Serge Ibaka, and Elfrid Payton.

Orlando used this play against Cleveland in NBA pre-season action. The play starts in a horns set and one big quick screens down for the other in the lane. The big that got the screen then sprints into a ball screen for the point guard. This screening action “Ram” puts x5 at a disadvantage if he is wanting to hard hedge on the ball screen or show at all. As 1 dribbles right off of the ball screen, 5 can roll or pop to his shooting range as 2 and 3 stay spaced in the corners and 4 moves to the ball side short corner area. 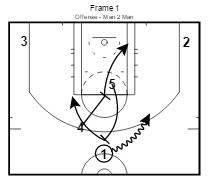