Below are two post up plays used by Iowa Hawkeyes Head Coach Fran McCaffery. McCaffery has taken four different programs to NCAA Tournament appearances. McCaffery got his coaching start in 1985 at Lehigh and made it to the NCAA Round of 64 in 1988 after a 21-10 record. He then was an assistant coach at Notre Dame from 1988-1999 until taking over at UNC Grennsboro in 1999. He would then make another jump to Siena in 2005 and lastly to Iowa in 2010. Overall, he has won 369 games in his career and 118 at Iowa. This past season, Iowa went 22-11 and lost to the eventual champion Villanova Wildcats in the 2016 NCAA Tournament.

The video below shows a couple of plays that McCaffery uses to get the ball into the post.

In this horns play, the point guard dribbles off of the screen from 4 as 2 moves in from the corner to set a back screen for 5. 1 looks to pass inside to 5 posting up, but if he isn’t open 1 can pass to 2 cutting off of a down screen from 4 (in the screen the screener action). The play can also be ran out of a box set. 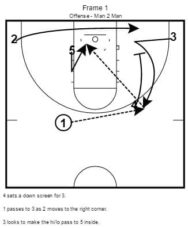 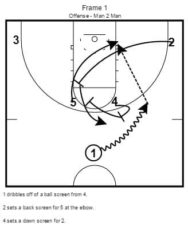 In this play, the big does a good job trying to get position early on the left block. If nothing is there, 4 sets a down screen for the wing in the right corner. 1 passes to 3 at the high post and 2 clears out from the left side of the floor. With 5 working for position early in the possession, the defender is now on his high side hip when 3 gets the ball. 5 holds position for the hi/lo pass towards the rim from 3.