I saw some videos and interviews floating around the internet yesterday that were recapping the back-to-back NCAA Tournament Championships by Florida in 2006 and 2007. Some of the stars on that team included Joakim Noah, Al Horford, Corey Brewer, and Taurean Green. The videos highlighted the work ethic that the team had and the chemistry between the players and coaches. Billy Donovan’s teams have always been good on offense, and one of the consistent aspects of his offense has been the use of ball screens. Especially when Donovan had Noah and Horford to set the screens, his teams were able to create a lot of different scoring opportunities with ball screens from various angles.The Florida Gators Billy Donovan Ball Screen Playbook has three plays used by Coach Donovan at Florida.

The Gators start by having the bigs run up (into a horns formation) with the guards moving to the corners. 1 dribbles off of a high ball screen looking for the roll by 4. If 4 isn’t open, 5 passes to 3 and follows with a ball screen. 1 and 2 exchange on the weak side and onnce the ball is passed, 4 steps out to set the second ball screen. If 2 passes to 3, 2 can cut to the strong corner and the motion continues. 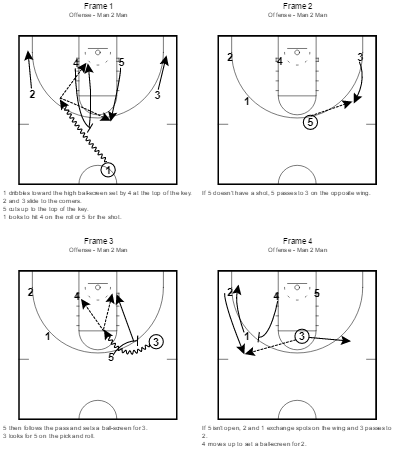 3 screens for 2 cutting across the floor. 4 then sets a screen for 5 to sprint into a ball screen. 4 can turn and make it a staggered screen too. 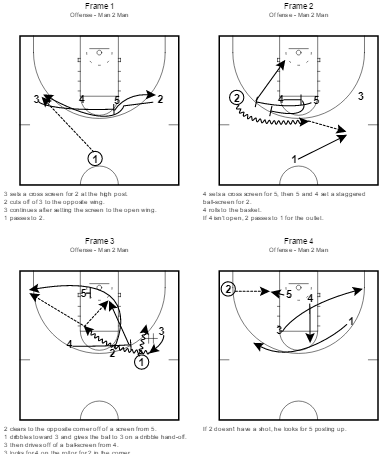 1 passes to 3 flashing up off of a pin down from 4 then loops around 5 for a back cut. If 1 isn’t open, 5 sets a high ball screen for 3 at the top of the key. 4 flashes to the high post behind the action. 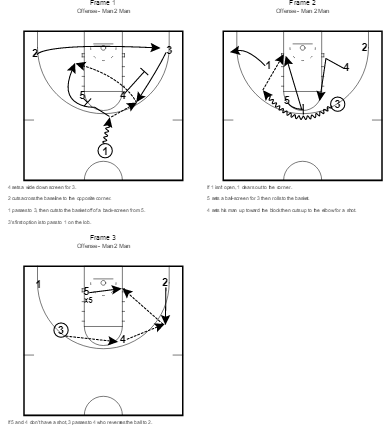