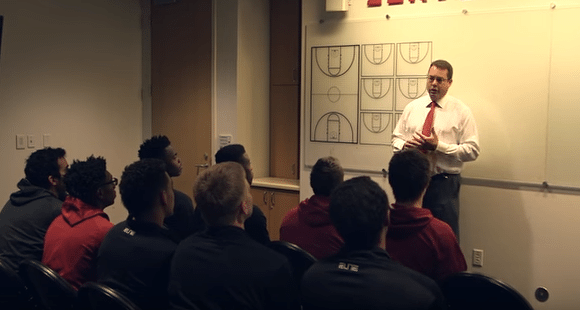 The NABC Convention in Houston over the Final Four weekend brought in some great speakers and presenters including: Grey Giovanine, Jerod Haase, Jim Baron, Steve Prohm, Bo Ryan, Brad Brownell, Chris Beard, Dave Odom, Jerry Krause, Steve DeMeo, and many more. Although I wasn’t able to attend all of the clinics, I will share some of the Final Four clinic notes I was able to put together from the presentations I attended. The best part about the clinic and convention is getting to meet with other coaches and share ideas about strategy, x’s & o’s, and coaching philosophy.

Jerod Haase had originally signed up to talk about UAB basketball, but with the recent move to take over as head coach of Stanford, Haase changed his presentation to a job-related focus. He spoke about the things that he prioritized when he took over for UAB and Stanford. Haase, who played at Cal with Jason Kidd and then transferred to Kansas, got his coaching star in 1999 as an assistant with Roy Williams at Kansas. He then followed Coach Williams to North Carolina in 2003, and stayed on staff until 2012. In 2016, he took over the UAB program. In four seasons as head coach, he increased the win total every season and put together an 80-53 record. He was named Conference USA Coach of the Year this past season and his Blazers won the regular season championship this season as well. UAB won the Conference USA Tournament Championship in 2015 and received a 14 seed in the NCAA tournament. His Blazers upset Iowa State in the first round and lost to UCLA in the round of 32.

Chris Beard gave a great presentation on his transition from Arkansas Little Rock to UNLV. Just two seasons ago, Chris Beard was the head coach for NCAA Division II Angelo State in San Angelo, TX. He got his coaching start as an assistant at Texas  when he was a student under Tom Penders. In 1995, Beard took an assistant job with Incarnate Word in San Antonio, TX. After that, he would serve as an assistant at Abilene Christian and North Texas as well as a head coach at Fort Scott CC and Seminole State CC. Beard then was an assistant for Bobby Knight at Texas Tech and then took over for the South Carolina Warriors in the ABA in 2011. He then went from South Carolina to McMurry (TX), Angelo State, and Arkansas Little Rock. Since 1991, Beard has made 12 different coaching stops at the Juco, Division II, professional, and Division 1 levels. In his last four seasons, Beard has a 96-30 record including a 30-5 record this past season with Arkansas Little Rock. A big thanks to Brandon Chambers for these notes on Chris Beard. He spoke a lot about how he was able to make his coaching moves and how important relationships are to him when it comes to coaching his teams. There are several good suggestions for how to encourage good relationships in the Final Four clinic notes.

Below, the playbook includes 3 drills from Coach Baron as well as a secondary set play. Coach Baron’s secondary offense is to drive & kick, but if nothing is there they will run a set play to get the ball moving.

Steve DeMeo, the head coach at Northwest Florida State, presented on his team’s offensive philosophy. The Raiders use multiple ball-screen actions and Coach DeMeo shared several wrinkles in his playbook. He also touched on his team’s ball screen defense strategy, which is to “ice” or “down” ball screens. Steve DeMeo has been the head coach at Northwest Florida State since 2013. In 3 seasons, he has an 82-14 record, won back to back Panhandle and Region 8 Championships, and won the 2015 National Championship. Before taking over for the Raiders, he was a head coach at Newberry College and Monroe College, and was an assistant at Hofstra, Central Florida, Providence, and Iona.

Coach Giovanine spoke about his philosophy at Division III Augustana College (IL). In his 17 seasons at Augustana, they have won 340 games including a 29-2 record this season. In his career, Giovanine has a 420-208 record. He coached at Lamar from 1993-1999 before taking over for Augustana. At Augustana, he has only had one losing season (his first in 1999-2000). His teams are known for playing fast and rebounding extremely well. In these notes, Coach Giovanine shares his philosophy on rebounding and scoring quickly. He has an interesting philosophy when it comes to scoring, as he wants to score in less than 4 seconds if possible. Only if the clock gets down to 15 seconds or so will Augustana run any set plays.

Dave Odom always hosts a session on Monday morning to discuss the National Championship  game. He encourages coaches to analyze and breakdown the game based on the coaching strengths, team strength, and strategies. As a former head coach, Odom always has some good input on what he thinks about the two teams. In this discussion, the majority of the room voted that North Carolina would win the National Championship.

PDF Download – Breaking Down the Championship Game with Dave Odom