Here are two plays from the Eran Ganot Hawaii Rainbow Warriors Man Offense. Ganot is in his second season as head coach of Hawaii after taking over in 2015-2016. That season was a memorable one for the Warriors as they went 27-6 and upset California in the NCAA Tournament 77-66 as a #13 seed. Ganot started his coaching career as a volunteer at St. Mary’s from 2003-2006 then was the Director of Operations for Hawaii in 2006. He was quickly promoted to an assistant role the next season and stayed at Hawaii until making a return to St. Mary’s to be an assistant. In 2014, he was elevated to Associate Coach at St. Mary’s for the 2014-2015 season as then was named Head Coach at Hawaii in 2015. He played college basketball at Swarthmore College, a Division III school in Pennsylvania.

This is a simple play out of the Two Guard Offense from Coach Ganot. As the point guard dribbles up the floor, 2 makes a cut up to the wing and looks to cut back door if his defender is extended out and trying to deny the wing entry pass. The spacing is great for the back door pass since all of the players are above the three point line leaving no help side defenders in the paint. 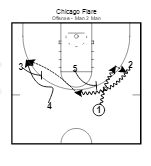 Another set out of the Two Guard Offense, this play starts with a dribble handoff exchange between 1 and 2 on the right wing. 2 then drives right into a ball screen from 5 stepping out from the high post. 2 looks to turn the corner and score if he can. The weak side defenders are taken out of it by a flare screen from 3 for 4. 2 can look to 4 for a shot on the wing as well.