What a difference a couple of days make! Head Coach Dwane Casey and the Toronto Raptors headed back home down 2-0 to the Eastern Conference’s #1 seed, Cleveland Cavaliers. Not only were the Raptors down 2-0 but they had been beaten handily in each meeting by a combined total of 50 points (31 and 19 in each game respectively). The Raptors were a team on the brink of being swept and were playing some of their worst basketball at the worst possible time.  Here is Dwane Casey Toronto Raptors Blob where they hit a winning shot.

A little home cooking was just what the team needed and they rebounded with two huge home victories. The Raptors stayed alive with a 15 point victory in game three and battled a tougher challenge but prevailed by 6 in Game 4. In Game 4, the Raptors blew an 18 point advantage, eventually trailing the Cavs in the 4th quarter by 6. Key shooting and play down the stretch by Kyle Lowry who finished with 35 points and DeMar DeRozan with 32 points led the Raptors charge.

While 2015-2016 has been a successful season, “We the North”, is hoping for an appearance in the NBA Finals as the culmination of basketball’s resurgence for Canada’s only remaining franchise. Toronto finished the regular season at 56-26, one game behind the Cleveland Cavaliers and good enough for the #2 seed in the Eastern Conference. The playoffs, however, have not been a cake walk for the team. In their first round matchup, the #7 seeded Indiana Pacers took Toronto to game 7 before Toronto pulled away with a 5 point victory in the winner take all matchup. 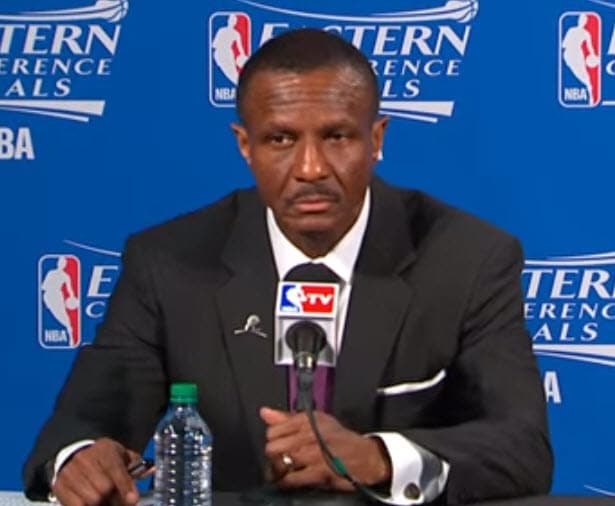 While Game 7 in the Eastern Conference’s Second (Semi-Final) round was anti-climatic, the series was a nail bitter night in and out. There would be a total of 3 overtime games in the 7 game series, before the Raptor eliminated the Heat handily in game 7.

After Cleveland’s massive victory in game 5, it will be interesting to see how the Raptors respond to another elimination game. To stave off elimination, the Raptors will have to improve their shooting from long range. Through 19 playoff games, the team is shooting 42.1% from the field but only 29.7% from three point range. Their team averages of 73.6 % from the FT line and their 16:13 Assist to Turnover average could be a difference maker in their attempt to pull of this come from behind series.