Dayton shooting is a Basketball Shooting Drill that I picked up from Archie Miller who is the head coach at the University of Dayton. His team had a great run during the 2014 NCAA tournament as they beat both Ohio State and Syracuse in the first two rounds. Coach Miller has put a product on the floor that that are known for working hard and getting great shots.

Coach Miller talked about making this basketball shooting drill competitive to put players in game situations. He has the teams split up into four groups with three players in each group. Each group also has a big man in it which helps the bigs to hit pressure shots as well.
The basketball shooting drill is from 15’ and is timed for 60 sec. Each group uses two basketballs. It starts with one player shooting followed by the second player with a ball shooting. The third player without a ball is making a V-cut to get open somewhere around 15’. The first shooter follows his shot and passes to the third player and then cuts to get open. This continues for 60 seconds and the team with the most makes wins.

Coach Miller talks about the competitive side of this drill and said that any players that don’t sprint after the rebound will lose points from their team’s total. This basketball shooting drill can also be a weekly challenge or can have the teams changed up to keep the competitiveness kept at a high level! 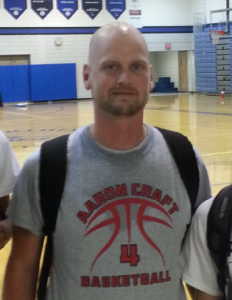