David Fizdale Memphis Grizzlies: Changes are coming! 2017 Coaching U Live Notes by Nathan Hill inside too! 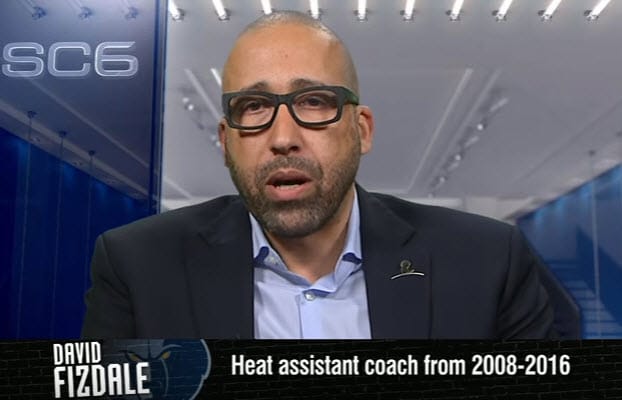 Learn how the David Fizdale Memphis Grizzlies are transitioning from “Grit ‘n’ Grind” to a new era! 2017 Coaching U Live Notes by Nathan Hill inside too!

May 29, 2016, is the day that the David Fizdale Memphis Grizzlies era began. Fizdale declared that day that he was going to contribute to an organization that had a history of winning. He wanted to win it all and bring the people of Memphis their first NBA championship parade down Beale Street.

The first thing that Coach Fizdale did last season introduced the 3 point shot as a part of the Grizzlies arsenal this past year. The players set career highs in both three point attempts and make as the Grizzlies offense improved. They went from an offensive rating of 102.6 to 104.7 last year. They shot a lot more, but they didn’t make more so it wasn’t as productive as he would have liked. The pace picked up a little bit, but also not as much as Coach Fizdale would have liked.

The Memphis Grizzlies would tend to fall back on their style of play which was pounding the ball inside and playing suffocating defense. The team got back to the playoffs and nearly took out the San Antonio Spurs in the first round.

So what is the next step in the David Fizdale Memphis Grizzlies Era?

The Memphis Grizzlies are in the rebuilding stage as long time fan favorites: Zack Randolph, Vince Carter, and Tony Allen are gone. They have a new cast of players in Ben McLemore, Tyreke Evans, Ivan Rabb, Dillion Brooks, and Rade Zagorac are replacing the aging veterans with new blood. The Memphis Grizzlies got much younger in the off-season, but they also left their past style of play and are moving on with the process.

Tony Allen and Zack Randolph were the cornerstones of pounding the rock in the paint and playing tough defense. The “Grit ‘n’ Grind was the central theme of the team ever since they began the playoff run.

Tony Allen came up with the “Grit ‘n’ Grind” after he locked down Kevin Durant and the OKC Thunder in the playoffs. He would scream “first team” and give first down signals after creating a turnover on defense.

The thing with Tony Allen is that he lacked a perimeter jumper and would miss some open layups which kill team. There were rumors of his locker room trouble and tons of injuries too.

The team officials had to see the writing on the wall with Zack Randolph too. Randolph was moved to the bench and wasn’t ideal for Coach Fizdale’s spacing and ball movement offense. Randolph was getting older and slowing down the offense.

The David Fizdale Memphis Grizzlies won’t be “old school” next year. They got young athletes that have speed and can spread out the court. Coach Fizdale is known as a teacher, so he will teach the younger players how he wants to play.

The team officials realized that they need to move on and here comes the painful part of the transition. They might not make the playoffs, but they were barely getting the eighth seed as it was.

The Grizzlies accomplished the first step. The team has recognized they needed to move from where they were. Now comes the hardest part of the transition. The Fans will have to accept the change and embrace it.

The Memphis Grizzlies weren’t going to win an NBA championship. They had a solid team, but not one that was going to over take the Golden State Warriors, so they needed to change things up. That is why they shopped Marc Gasol a little bit after the NBA Draft.

The two centerpieces of the team are still Marc Gasol and Mike Conley. Chandler Parsons should be ready for this season. Wayne Selden came on strong at the end of last season. The bench has Troy Daniels, James Ennis, Jarell Martin, and Brandan Wright back. Mario Chalmers is on a non-guaranteed contract to teach the Miami Heat offense to them.

What happens next with one of the youngest rosters in the NBA?

The David Fizdale Memphis Grizzlies had limited draft pick options, so it’s pretty impressive the Memphis got a lot more athletic and versatile in the free agency market. The new talent will be inexperienced and need to be taught how to play. This team is getting ready for the future in the improved NBA Western Conference.

How will Marc Gasol fit in the new offense?

Marc Gasol didn’t accept his role as a leader last season in a public way. He also didn’t seem engaged by the coaching style of Coach Fizdale either. Gasol did thrive under Fizdale and made the All-star team considering that he was coming back from an injury.

Mike Conley seems to like the vision of the new team. Marc Gasol and Mike Conley are the only veteran presence in the locker room these days. They are also the only players 30 or older on this roster. Fizdale must trust that his two stars are on board with all the changes of the Memphis Grizzlies.

Coach Fizdale earned more street credit with his team on and off the basketball court. A real winning culture can sustain players coming and going. It’s more than X’s, and O’s, It’s about Jimmies and Joes. You have to come to work every day, learn how to compete, and how you do your job. If the culture is set, then it will define how the David Fizdale Memphis Grizzlies will be in Bluff City this year.

← Prev: Spread Offense Notes Next: Dealing with Lavar Ball and others like him! by John Mietus →