Here are two set plays used by Coach Dana Altman Oregon during the NCAA Tournament. Altman just completed his 5th year at Oregon, where he has posted a 123-57 record. In 26 years of coaching, Altman has won over 500 games. He won the majority of those games as head coach at Creighton, where he served at the helm from 1994 – 2010. He got his coaching start as an assistant at Western State in 1980. After two seasons, he jumped into the JUCO level as a head coach at Southeast CC and Moberly CC. From Moberly, he took a job as an assistant at Kansas State. Altman has been the head coach at Marshall, Kansas State, Creighton, and now Oregon. He has been named Coach of the Year in 4 conferences (SoCon, Big Eight, MVC, & Pac-12). He also was named the Jim Phelan National Coach of the Year in 2013.

1 passes to 4 on the wing then makes a shallow cut to the short corner. Once 4 has the ball, 2 sets a down-screen for 5. 5 cuts to the top of the key for a shot. This is a great play if your 5 can stretch the defense.

1 passes to 4 as 5 sets a flex-screen for 2. 2 cuts across the lane looking for the pass. If it isn’t there, 1 sets a down-screen for 5 (regular flex). If 5 gets the ball without a good look at a shot, 4 and 2 move toward the right corner to set a staggered down-screen for 3. 3 cuts up off of the screen looking for a shot. 5 can also use the open space to take the ball to the basket. 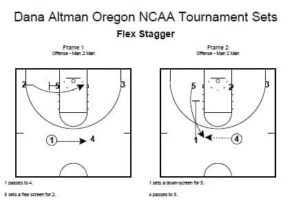