5 Things about the Dana Altman Oregon Ducks Half Court Man Offense and his past that you need to know! 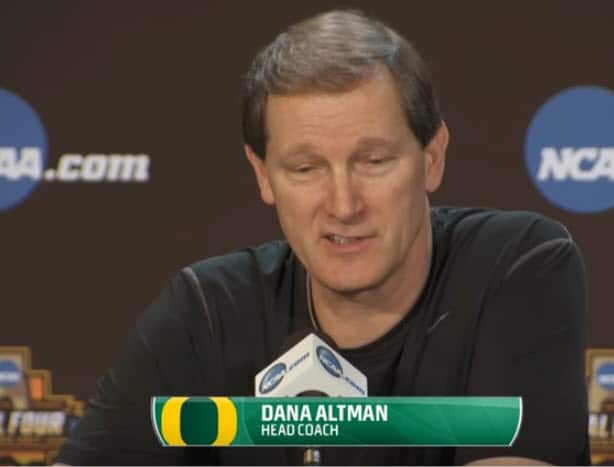 I think that you are going to like this snapshot of the Dana Altman Oregon Ducks Half Court Man Offense. I love how he runs his offense!

How Dana Altman ran his offense  20 years ago and now:

Dana Altman almost had Oregon in the National Championship game. You can learn a lot about Coach Altman and how he runs his Dana Altman Oregon Ducks Half Court Man Offense. If you ask his former players, then they would tell you how his mood could get from being chill to crazy in one hot minute with a turnover. That he hates losing and still uses the same phrases from 20 years ago.

Coach Altman is running a lot of the same sets that he used at Creighton. A lot less structure and more improvisation in the offense, but the biggest thing is the level of athletes on the court.
The Creighton players say that the Ducks have a greater margin for error for running the same exact sets. They make plays that the Creighton players couldn’t have done the action.

All the coaching norms that Coach Altman bucks these days:

Coach Altman is 58 years old and he got his start in the juco ranks. It’s very unusal among NCAA Division 1 head coaches where most of their peers started as graduate assistants.

One, he’s making his first Final Four at 58 years old. Two, he got his start in junior colleges, highly unusual among Division I head coaches — most of his peers entered the business as graduate assistants. Coach Altman went 11 years without an NCAA tournament win. He has made in the coaching ranks the old fashion way. The best attribute of Coach Altman is that he can maximize talent.

How did two ex-Kansas State Wildcat Coaches get to the Final Four?

Dana Altman and Frank Martin both coached at Kansas State. Kansas State has only been to one Sweet 16 apprearance since 1988. Kansas State gave Coach Altman his first major coaching job and he wasn’t ready for it. It’s too bad that he didn’t start coaching at Creighton where you just have to win. He didn’t know that you have to do the summer events and win over the fans at Kansas State.