Basketball Plays | Coaching in Crunchtime – Drawing Up the Gamewinner 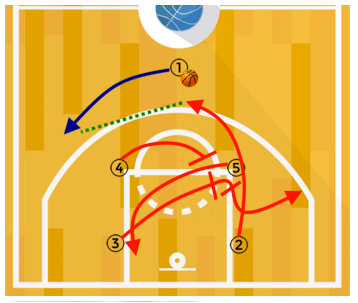 We’ve all been there – crunchtime play – it’s a one possession game, it’s all coming down to one shot. You beat the entire defense singlehandedly, and raise up for the jumpshot.

Swish. Your teams wins the game, and you’re the hero.

That’s how it goes in the backyard at least. When it comes down to real game situations, the stakes are just as high, but actually getting the desired result can be pretty difficult. Because just as badly as you want to score, the defense wants to stop you.

As a coach, it is your job to put your team in the best position to succeed whenever you can, and going iso 1 v. 5 is not going to get the job done.

One of the best ways you can put your players in a position to succeed is by calling this play. While it’s true that there often is one player who you want making that final decision – whether it be shoot or pass to an open teammate – you can create movement before he gets get the ball to make his job easier. This is an especially great play to call if you are down two and want to possibly go for the win – there is a good look at three early, but if it isn’t there, there are a litany of other options.

To start, have the point guard line up at the top of the key, with the other four players forming a box – power forward right elbow, center left elbow, small forward right block, shooting guard left block.

The point guard will dribble over to the right wing, kicking off the play. Immediately, the small forward will go set a backscreen on the center, who will cut across to the right side of the court, looking for the layup.

The small forward and power forward will then set staggered screens for the shooting guard, who will use them to come up to the top of the key for a good look at the three.

Have your point guard stand at the top of the key, a couple of feet off the 3-point line. The rest of the players will be in a box formation, standing on the elbows and boxes of the key.

When running Box X, you have the luxury of taking the three if you like, but also looking at buckets worth two points. But sometimes, you’re down 3 points with only time enough to get one more shot up. And that is the perfect situation to call this play. 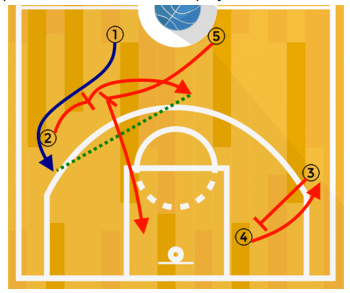 The play can be run out of the halfcourt, or if you don’t have any timeouts, can also work when run as a kind of secondary break coming down from the full court. Either way, the play will begin with the point guard bringing the ball over halfcourt, on the right side of the court, with the center trailing behind on the weak side.

The shooting guard will line up on the ball side wing, and forwards will be on the weak side, with the small forward out on the wing, and the power forward down on the block. crunchtime play

This will allow the shooting guard to fade to the top of the paint, while the center dives hard to the hoop. Along with the small forward setting a downscreen on the power forward, this will give you two great looks from high percentage three point shooters, with an emergency option on the weak side should the defense over pursue. crunchtime play

This can be not only a difficult read for the point guard to make, but a difficult pass as well. To help the players get a feel for this play, it can be a good idea to start it off as a 3 on 2 drill or 3 on 3 drill, taking the forwards out and working slowly back up to 5 on 5.

If you’d like more help with your half-court offense, make sure you check out our selection of downloadable Basketball Playbooks. crunchtime play

Or if you need help with skill development, check out our Basketball Drillbooks – packed with fun and effective practice ideas your players will love!