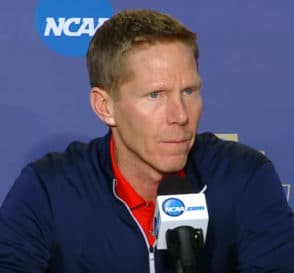 What Mark Few is up to right now:

Mark Few and his Gonzaga Zags are going to play someone new in the San Diego Toreros tonight. San Diego is one of the two last WCC teams that the Bulldogs have to face, with the last one being the BYU Cougars next week.

The Gonzaga Zags beat up Santa Clara and Portland last week. They had some injuries in Nigel Williams-Goss and Josh Perkins. Killian Tillie had an ankle sprain and could be for a while.

San Diego is 3-5 in conference play, but one of those wins came against BYU. They had a good win against LMU and got killed by San Francisco. Last time, San Diego only scored 43 points last time. San Diego is 10-10 right now.

San Diego averages 70.4 per game, but they give up 71.6 points per game. Defense isn’t the only issue that the Toreros have. They are limited to ball movement, and their opponents shoot 45.8 percent of the time.

It’s going to an ugly game for San Diego, who has no size to compete against the Zags frontcourt.

So who will take the Zag’s minutes for Killian Tillie? Tillie won’t see the floor for a couple of games. Rui Hachmura will fill the void, just based on length and athleticism. Tille would be a huge spark on the offensive and defensive ends of the floor if he were available.

If Coach Few decides to go smaller, then he could give some minutes to Albert. The final call will be somewhere in the middle. Truly, they won’t be pushed to the limit tonight at all.