Coach Jim Boone is in his fifth season (71-48) as head coach of the Delta State University Statesmen Basketball program in Cleveland, Mississippi. Boone (501-378), a native of Winfield, W.V., brings 31 years of collegiate coaching experience to Delta State, including stops at the NCAA Division I and II levels. His career record speaks to his success on the hardwood, but his real niche has been at the NCAA DII level where he has posted a blistering 409-214 mark as a head coach. (Info courtesy of Delta State Men’s Basketball)

Prior to Delta State, Coach Boone began his coaching career at his alma mater as an assistant coach for West Virginia State College. His first DI job came as an assistant for Charleston Southern where they captured a Big South Conference Title. In his first head coaching role, Coach Boone led DII California University of Pennsylvania to a 228-71 record over the course of ten seasons. Boone’s next two stops were at the DI level in rebuilding programs at Robert Morris and Eastern Michigan Universities. Boone’s last stop before arriving at Delta State was Head Coach at DII Tusculum College. Through all of this, Coach Boone holds a DI record as head coach of 92-164, DII record of 409-214, and an overall record of 501-378.

Delta State, a member of the NCAA DII Gulf South Conference has seen steady improvement under Boone. During the 2015-2016 season, the Statesmen finished 19-11 overall with a conference mark of 13-9. The team won their first round conference tournament game but ultimately fell in the second round to Alabama-Huntsville. This was an improvement on the 2014-2015 season in which the Statesmen finished 12-10 in conference and 15-14 overall including their first round conference tournament defeat. 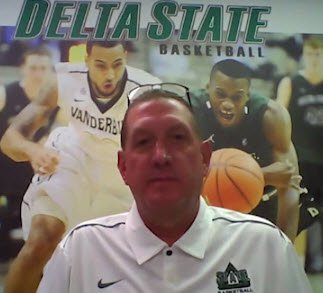 In addition to building their program and speaking at clinics, Coach Boone’s staff has a dedicated newsletter for coaches that provides great insight into their program. Assistant Coach Robert Szorc sends their newsletter out monthly chocked full of great content. Every month you will get some great coaching tips, a Pack Line drill, and more.

I pulled three drills from the previous newsletters that would help to implement some of your Packline principles. These drills not only include a breakdown component but also a whole 5 on 5 piece that makes it more gamelike for the players involved. In the conversion drill, one piece sometimes missed (intentional transition defense) is covered within the confines the drill structure.

I hope that these drills can help your team this off-season. If you are interested in joining Coach Boone’s Newsletter, email Coach Robert Szorc at rszorc@deltastate.edu