Here is a set play originally shown in video on Brandon Chamber’s YouTube page. Coach Chambers is the video coordinator for the Nevada Wolfpack men’s basketball program. The baseline double play comes from Kentucky Head Coach John Calipari. Calipari has been the head coach at Kentucky since 2009. Calipari has spent time in the NBA as well, coaching as the head coach of the New Jersey Nets from 1996-1999 and as an assistant for the Philadelphia 76ers from 1999-2000. Coach Cal got his coaching start as an assistant at Kansas and Pittsburgh, then was named head coach of UMass in 1988. Calipari has led his teams to six NCAA Regional Championships (Final Four Appearances), those being in 1996, 2008, 2011, 2012, 2014, and 2015. He won the 2012 NCAA Division 1 Tournament Championship with Anthony Davis leading the way. His teams were also runner ups in 2008 and 2014. He has been awarded the Naismith College Coach of the Year three times (1996, 2008, and 2015).

1 dribbles the ball towards the left wing sending 2 on a zipper cut up the lane line to get the ball. 3 moves down from the wing to the block as 2 is making his cut. Once 2 has the ball, 5 and 1 turn to set a staggered screen for 3. 3 looks for a shot on the wing, but if he doesn’t have anything 1 cuts out towards the top of the key and 2 moves in towards the free throw line. 3 passes out to 1 and gets a back screen from 5. If nothing is there, 1 dribbles middle and the rest of the players are in a diamond formation. 3 chooses with screen to cut off of (4 or 5’s) and 2 moves opposite of 3 to the wing. 3 can also fake the action and run opposite. 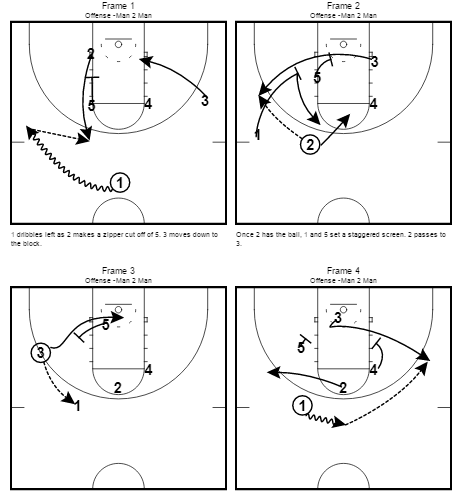