Here are three plays going through the pinch post from Kansas Jayhawks Head Coach Bill Self. Self, known for his high-low offense and post play, gets some really good looks out of his pinch post plays. The pinch post is defined as the post player at the weak side elbow with no players on the wing, corner, or block on that same side of the floor. The action has been used a ton in the NBA and has started to trickle it’s way down to the college level. Teams often get into the action by clearing out a guard, but teams can also run right into the formation in transition. The pinch post is even more effective if the big that you are throwing to is a playmaker and/or good passer. Similar to the “point series” used in the Princeton offense, once the ball gets to the high post there are a number of actions that can be used. The first option in all of the plays is a catch, rip, and drive by the big for a layup.

The ball gets to 5 at the pinch post and is thrown to 2 on the wing. As 2 gets the ball, 4 seals his man and works him up the lane line for the post entry pass. 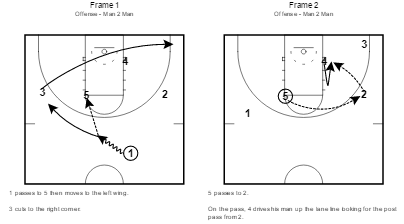 1 loops around 5 at the pinch post looking for a handoff. Once 1 has the ball, 5 screens for 3 who cuts behind the action for a shot. 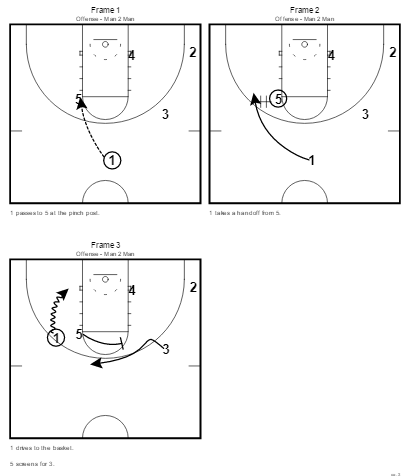 Similar to the first play, but the angle is different with 1 cutting towards the slot to get the pass from 5. With this angle, x4 may be on the outside of 4 or playing behind. Either way, 3 looks to get the ball inside for the post up. 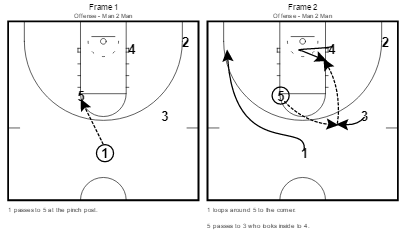