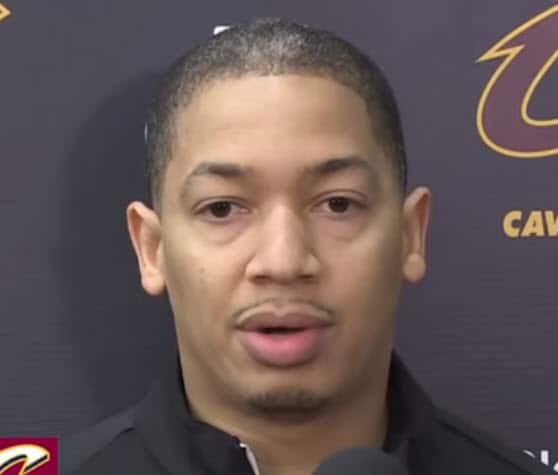 What a year for the Cleveland Cavaliers! In an effort to bounce back from their Finals defeat in 2015, the Cavs has been the steady beginning to end favorite in the Eastern Conference. Favorite status tends to happen when you have Lebron James on your team. While Lebron certainly brings a major upside, the distractions of having a superstar in your ranks during the age of social media has it challenges as well. Today we present a great Cleveland Cavaliers Blob Offense implemented against the Pistons.

Mid-way through the 2015-16 season, while still dominating the Eastern COnference, Coach David Blatt was relieved from his duties and replaced with Tyronn LUe. Lue an assistant for Coach Blatt and certainly deserving of the opportunity was initially uncomfortable with the change but has embraced his role as the head of the Cavs attack. You may remember Tyronn Lue from his successful playing career but during this season’s HOF Induction Announcements, I was reminded of one of Lue’s less successful Finals moment in being stepped-over by Allen Iverson. Of course the Lakers would get the last laugh with their 4-1 series victory over the 76ers.

In their first round playoff series, the Cavs have had to battle a young but tough Stan Van Gundy coached Detroit Pistons. The 8 seeded Pistons took the Cavs to the wire in multiple games, including game 4 in which the Pistons missed a shot for the win at the buzzer. While the Pistons fought valiantly they were ultimately unsuccessful. Part of their demise was the young inexperienced players in Detroit which led to Cleveland BLOBs like this being successful. While Detroit could not pull off any upsets, they did make it an entertaining series to say the least.

In this Cleveland BLOB during game two, the Detroit defense helped heavily over the cross screen set by Kevin Love. This allowed for the great read by Love as he slipped to the rim for an easy basket. Without the overplay on defense, the seal may be there while the cross screens up top allow for several other great options to get the ball in play and possibly a look at the rim. Hopefully this can help sneak out a tight AAU victory this summer or conference battler next season for you and your team.

Click on the pdf link to download the Cleveland Cavaliers BLOB vs. Detroit Pistons 2016 NBA Playoffs, Round 1: